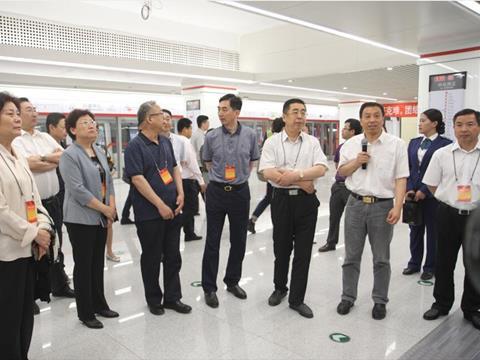 CHINA: The second phase of Shijiazhuang metro Line 1 opened to passengers at 06.30 on June 26.

The 13·5 km extension runs northwards from the former eastern terminus at Xiaohedadao under the Hutuo River to serve the city’s northeast suburbs, adding eight stations. However, only the first 10·4 km to Fuze and six stations have opened so far. This section takes Line 1 to 34·4 km with an end-to-end journey time of 58 min.

Construction of the second phase commenced in July 2014 and tunnelling was completed on December 17 2018. Tracklaying finished on February 3, allowing test running to start on March 5.

The 16·2 km north-south Line 2 is currently under construction for completion in 2020, as well as two extensions of Line 3, which would bring that line to 19·6 km. The city’s long-term plans adopted earlier this year envisage a six-line network totalling 169·2 km, with a further 64 km to be added in 2020-25.