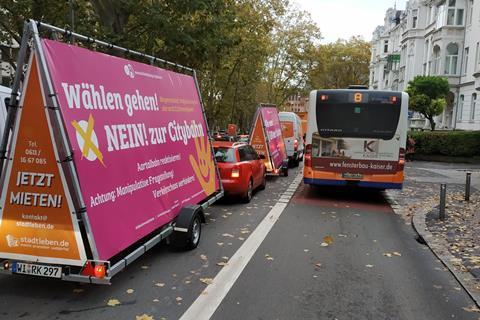 Opponents of the Wiesbaden light rail project in a queue of traffic alongside a bus lane.

GERMANY: Development of the Citybahn proposal for a light rail line linking Mainz, Wiesbaden, Taunusstein and Bad Schwalbach has been stopped, after a referendum in Wiesbaden on November 1 saw 62·1% of voters oppose the project on a 46·2% turnout.

The proposed metre-gauge line would have been around 35 km long, connecting the Aartalbahn rail corridor with the existing Mainz tram network. 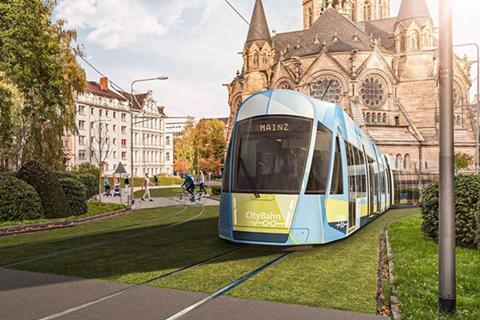 Opponents said the estimated €426m cost was too high and the line would have taken up road space. There were also claims – disputed by the proponents – that many trees would need to be removed.

The local transport authorities who promoted the project will now consider a bus rapid transit scheme instead, but pointed out that this would take up more street space and require the construction of large concrete tracks. There would also be less non-local funding available for a bus project.

‘The citizens of the city did not recognise the opportunity of the century’, said Uwe Hiltmann, Managing Director of promoter CityBahn GmbH.

‘The CityBahn project did not deserve this result’, added Günter F Döring, head of Transport for the Rheingau-Taunus district. ‘It is a shame that many Wiesbaden residents have been guided by false claims’. Although the result had been particularly disappointing for the Rheingau-Taunus area, he emphasised that ‘we will not let ourselves get down and will continue to fight for local rail transport.’