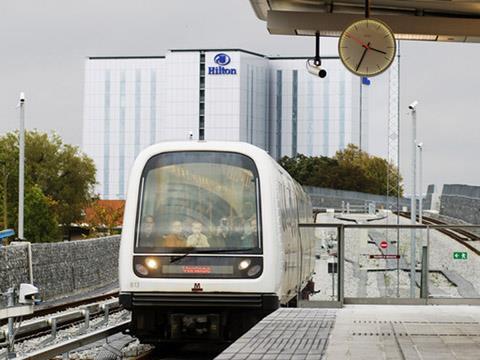 SAUDI ARABIA: A contract for the construction of an automatic light metro within the Princess Noura Bint Abdulrahman women's university in Riyadh was signed on Finmeccanica's stand at the Paris air show.

General contractor Saudi Binladen Group has awarded a consortium of Ansaldo STS and AnsaldoBreda a €218m contract to design, build and commission the metro on 'the world's largest university campus', which is now being built in Riyadh.

AnsaldoBreda's share of the contract is worth €69m and covers the supply of 22 two-car air-conditioned trainsets. They be 28·7 m long and 2·65 m wide with aluminium bodies, and will have space for 24 seated and 119 standing passengers.

Ansaldo STS said its €149m share of the contract gives it a foothold in the Saudi Arabian market, 'one of the most active in the rail and metro transport sector', as well as laying the foundations for a strategic alliance with Saudi Binladen Group, 'one of the most important players in the Middle East.'

Ansaldo STS was responsible for the København metro, which it sees as a showcase for its driverless light metro technology, and is undertaking similar driverless metro projects in Brescia, Milano, Roma, Thessaloniki and Taipei.