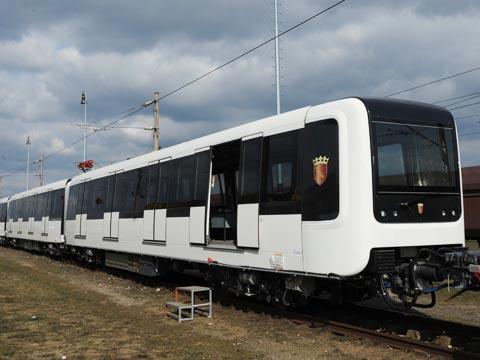 ITALY: The first driverless trainset for Roma Metro Line C has arrived at the Velim test track in the Czech Republic for commissioning trials ahead of the opening of the first section of the line next year.

AnsaldoBreda is supplying 30 six-car trainsets to the Metro C consortium which has the contract to build and operate the line at an estimated cost of €3bn.

Construction is well advanced on Line C, which incorporates part of the former interurban tramway linking Roma and Pantano. Total length of the route is 25·5 km, of which 17·6 km is underground, and it will have 30 stations. The easternmost surface section between Pantano and Parco di Centocelli is expected to open during 2011, followed by the central section as far as the Line A interchange at San Giovanni in 2013. The final northern section under the city centre to Clodio Mazzini is due to be completed by 2015.

Line C is expected to carry up to 24 000 passengers/h in each direction at peak times, with trains running at 3 min headways. The 107 m long trainsets will each have a crush-load capacity of 1 200 passengers, and will operate at a maximum speed of 90 km/h. Average commercial speed including stops will be 35 km/h, according to Metro C.