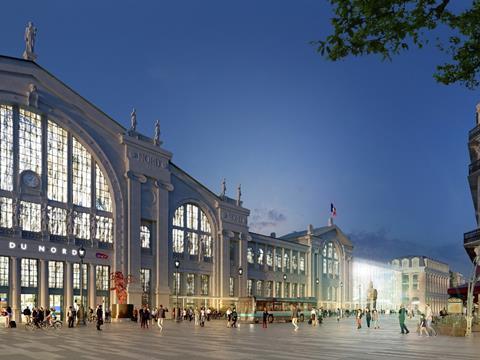 FRANCE: The refurbishment and expansion of Paris-Nord station took a step forward on July 9 when the management board of SNCF Mobilités selected Ceetrus as preferred partner for exclusive negotiation with Ceetrus to undertake the programme.

Ceetrus is the commercial property arm of retail group Auchan, and SNCF said that it hoped to conclude a formal development partnership by the end of the year. This envisages the establishment of a joint venture 66% owned by Ceetrus and 33% by SNCF’s Gares & Connexions stations business covering both the expansion work and management of the station’s commercial activity for a period of between 35 and 46 years.

The Paris-Nord renewal project was launched by SNCF in June 2015 for completion by 2023. Some early stages of the programme have already been completed, including an initial expansion of the Eurostar terminal, while reconfiguration of the existing long-distance concourse is now underway. However, when completed ahead of the start of the 2024 Olympic Games which Paris is hosting, the refurbishment is expected to triple the size of what is already Europe’s busiest station.

Architect Denis Valode will lead the renovation, which will include construction of a ‘departure terminal’ designed in line with Parisian architectural themes of the 19th century. A 'passage Parisien' gallery 18 m tall and 300 m wide will offer ‘an array of railway, intermodal and commercial services’, SNCF says.

From a passenger perspective, the refurbishment is intended to increase the focus on ‘everyday transport’ by enhancing multimodal connectivity between suburban trains, buses and cycling options. Reflecting the coming Olympics, Gares & Connexions is also planning to embed sporting activity as a core theme, including construction of a 1 km running track on the roof of the station. Golf and basketball facilities are also planned.

Currently handling 700 000 passengers per day, the station is forecast to be handling 900 000 per day by 2030. Concourse space will more than doubled from 15 000 m2 to 37 000 m2, served by 55 lifts and 105 escalators. A new entrance will be provided to link the Rue Faubourg Saint-Denis and the departure hall, while additional work on the Eurostar terminal will include accommodating an expected increase in border controls resulting from Brexit. The programme also includes planned provision of a European academy of culture covering 2 000 m2, and 5 500 m2 of shared working space to be operated by WeWork.

A range of environmental measures is being incorporated into the programme, including extensive use of wood in construction of the expanded facilities and installation of 3 200 m2 of photovoltaic cells.

‘Each time we transform a railway station in Paris, we transform part of a Parisian neighbourhood’, explained Patrick Ropert, CEO of Gares & Connexions. ‘Paris-Nord will become the symbolic station of the 21st century, by ensuring the availability of the maximum number of services, adapted to the needs of our society. Tripling the size of the station for the 2024 Olympics is a huge challenge which we are undertaking with great determination and pride.’

Read our interview with Patrick Ropert, which appeared in the March 2017 issue of Railway Gazette International.