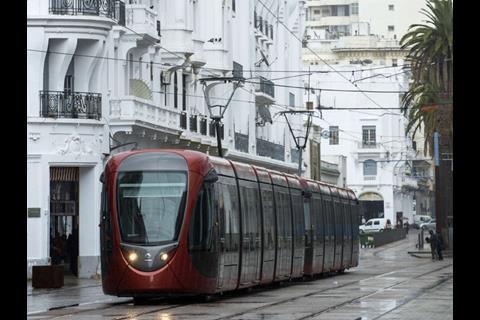 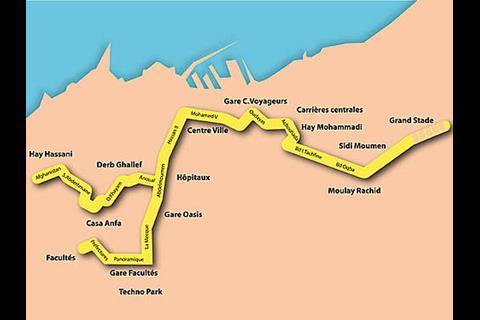 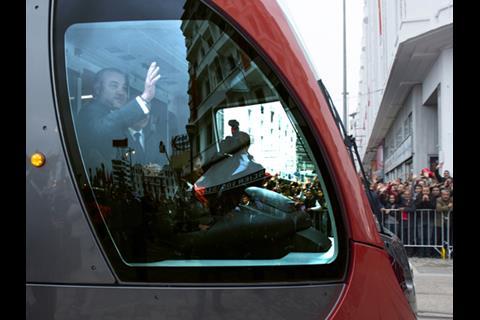 The 31 km Y-shaped route with a total of 48 stops runs from Ennassim and Sidi Moumen in the eastern suburbs through the city centre to Bd Anouai, where the two branches split to serve Hay Hassani and Ain Diab near the Atlantic coast and Facultés in the southwest.

End-to-end journey times are put at 63 min from Ennassim to Facultés and 69 min from Ennassim to Hay Hassani, giving a commercial speed of around 19 km/h. Trams will run every 4 to 5 min in the peaks and every 8½ min off-peak. The line is expected to carry around 250 000 passengers per day.

The network is operated by a fleet of 74 Alstom Citadis low-floor trams, which were assembled at Reichshoffen in France, with engineering design provided by La Rochelle, bogies from Le Creusot, motors from Ornans, electronics from Villeurbanne and the traction system from Tarbes.

The cars operate back-to-back in pairs to form 65 m long trains able to carry up to 606 passengers, with 12 sets of doors per side, allowing rapid boarding and alighting. They are based at a 7 ha depot complex in Sidi Moumen, where the control centre is located.

As well as supplying the vehicles, Alstom won two additional contracts in 2010 covering the installation of signalling and power supplies. A separate contract awarded in July 2012 covers maintenance of the fleet and infrastructure for the initial five years.