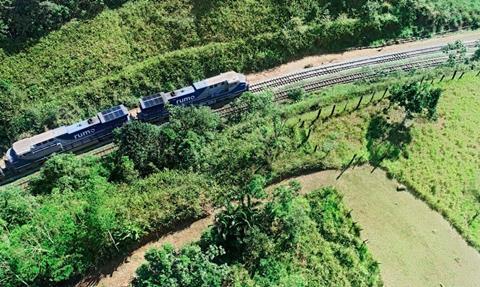 BRAZIL: National land transportation agency ANTT and the Ministry of Infrastructure have signed the long-awaited extension of Rumo Logística’s concession to manage and operate the Paulista network.

The agreement provides for a 30-year extension of the concession from 2028 to 2058, and will see the concessionaire invest around R$6bn in upgrades and capacity improvements. Rumo Logística has agreed to pay just over R$2∙9bn (at December 2017 prices) in concession fees.

Announcing the deal on May 27, Minister of Infrastructure Tarcísio Gomes de Freitas said that ‘today is a historic day. We overcame many challenges to provide Brazil with railway investments after such a long time’. Noting that extension of the agreement ‘paves the way for new projects that will balance the country’s transportation mix’, he indicated that it would lead to 10 000 jobs being generated. ANTT predicts that an average of 7 000 jobs a year will be generated in the first 10 years, and 2 000 jobs a year in the following years.

Acting Director General of ANTT Marcelo Vinaud said the extension of the agreement ‘demonstrated that with technical confidence, effort and diligence, we were able to present good projects and make the country grow’. The extension offered ‘numerous benefits for society, the Union, states and municipalities which are covered by the railway’s area of influence’.

Marcos Marinho Lutz, Rumo’s Board Chairman, said that there was much work to be done. The company will invest around R$3∙1bn this year, he said, R$2bn of which will be on the Paulista network. Over the next three years R$12bn will be invested in railway expansion, and ‘work on the Paulista railway to expand capacity into Mato Grosso begins immediately’, he said. ‘The distance between two markets is not measured in kilometres, it is measured in reais. We really need to make a lot of rail investments in Mato Grosso to build better national integration’, he continued.

Rumo’s commitment to invest in the Paulista network will enable the network to handle more than 100 million tonnes of freight a year, more than double the present capacity of about 40 million tonnes a year; demand is expected to reach 75 million tonnes a year by 2023. Much of this is export traffic destined for the port of Santos, the main commodities being corn, soya products, sugar, iron ore and oil. Other products include pulp, alcohol and manganese.

Further investments worth around R$1bn will be made to ‘minimise conflict between the railway and the municipality in 40 municipalities’. These measures will benefit around 5∙3 million people and will ‘bring road safety and safeguard the life and health of the population’.

The agreement brings to an end a long legal dispute related to the labour liabilities of the former government-owned RFFSA network which was let as a concession to Ferroban in December 1998.