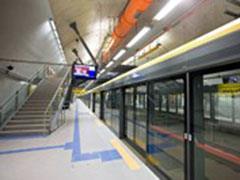 BRAZIL: Power supplies, communications and other systems for the second phase of São Paulo's automated metro Line 4 are to be supplied by a consortium of Alstom (72·4%) and Thyssen-Krupp under a contract awarded by metro operator CMSP and announced on November 12.

Installation is due to be completed in 2015.

Alstom's share of the work is worth around €40m and includes medium and low voltage power supplies (excluding the rigid catenary), telecoms, CCTV, passenger information systems and links connecting auxiliary systems such as fire detection, lighting and ventilation from the stations to the main control centre. Thyssen-Krupp is responsible for escalators and lifts.

Opened in stages since May 2010, Line 4 connects the southwestern suburbs of Butantã, Pinheiros and Faria Lima with Luz in the city centre, providing interchange to Line 2 at Paulista and Line 3 at República.

Phase II covers the completion of intermediate stations at Higienópolis-Mackenzie, Oscar Freire and Fradique Coutinho, together with a westward extension from Butantã to São Paulo-Morumbi and Vila Sônia, where a new bus-rail interchange is to be located. When completed the line will be 12·8 km long with 11 stations, and ridership is expected to be around 1 million passengers/day.

Line 4 is operated and maintained by the ViaQuatro consortium under a PPP concession with the city. CMSP was responsible for construction of the tunnels, stations, substations and maintenance depot, together with interchanges and car parks. ViaQuatro procured rolling stock, signalling and the operations control centre.

Work on Phase II was officially launched by São Paulo state Governor Geraldo Alckmin and Transport Secretary Jurandir Fernandes in March. The cost of the Phase II works is put at R$1·8bn, bringing the total investment in Line 4 to R$5·6bn.

Meanwhile, design studies are underway for a further extension of around 3 km beyond Vila Sônia, which would continue Line 4 to the district of Taboão da Serra.