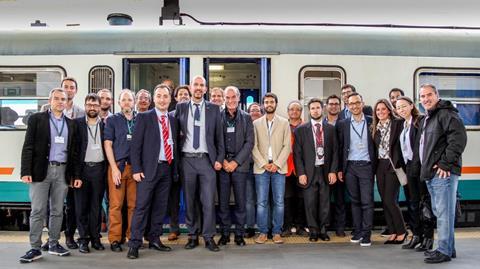 The ERSAT-GGC team assembled during the data collection and route classification trials in Italy.

A wave of modernisation and innovation is sweeping the rail sector, and despite the current coronavirus crisis, the need for modal shift towards more sustainable transport remains critical. The European Commission has made rail the backbone of its transport aims for ‘net zero’ carbon neutrality by 2050, as evidenced by its decision to designate 2021 as the EU’s ‘Year of Rail’.

The roll-out of ERTMS remains a cornerstone of the plans to achieve these macro-level goals by reducing the cost and improving the safety of rail services. However, deployment has made slow progress in recent years, and there is pressure to accelerate the rate of implementation.

One catalyst for this is finding ways to reduce the cost of ERTMS. There has been a lot of discussion about the scope for using satellite positioning as a way to avoid the need for expensive fixed infrastructure, particularly on regional lines, and this is one of the ‘game changers’ currently under investigation.

The broad idea is to integrate ERTMS with the location tools provided by the two Global Navigation Satellite Systems: GPS and Galileo. However, it has so far proved difficult to realise the potential of this combination, partly because GNSS is a service provided by entities that lie outside the control of the railway sector.

Integration would require the creation of a ‘bridge’ between the GNSS world and the railway one. Work has been underway for several years to define a common understanding and language, agree on the functional requirements, and allocate responsibility for safety assurance between the two sides.

The ERSAT-Galileo Game Changer innovation project represents the latest step in the process. Its core aim is to improve the overall economic sustainability of ERTMS and in particular to incentivise its introduction on local and regional railways by combining ERTMS with GNSS and the multi-bearer public telecom services.

In order to integrate GNSS with ERTMS, the railway community investigated an approach based on the virtual balise concept, which is now approaching maturity. This reduces cost, because the virtual balise does not require any physical intervention with the infrastructure itself.

The virtual balise replaces its conventional track-mounted equivalent by georeferenced locations, so that any train can compute its own position to detect the virtual balise and apply the same rules as would occur with a physical balise. The virtual balise can therefore perform within the current ERTMS specifications while reducing the number of assets fitted to the infrastructure.

In addition to ERSAT-GGC, a number of other research projects are being undertaken to examine the potential of virtual balises, including Shift2Rail work on train positioning and several others backed by the European Space Agency.

The difficulty of relying on GNSS signals for safe positioning is primarily caused by their inconsistent quality, which is largely determined by the specific local surroundings of the train and track. Local radio frequency obstacles around the track can obstruct, reflect or interfere with the satellite signals before they reach the GNSS antenna. As the position is estimated based on signal propagation time, these phenomena can not only reduce the availability of location data but also affect the accuracy of the results and therefore the overall trust in the information provided.

Not all rail applications require very accurate positioning or a fully available service. Degraded but clearly defined inaccuracy can fulfil some requirements. Yet the integrity associated with bounded inaccuracy plays a critical safety role, and signalling engineers will need to develop predictable performance models with which they can safely produce accurate dimensions of the railway infrastructure. This necessitates ‘smart integration’ of GNSS into the signalling logic so that degraded satellite data performance can be managed without impairing the vital train control functions. 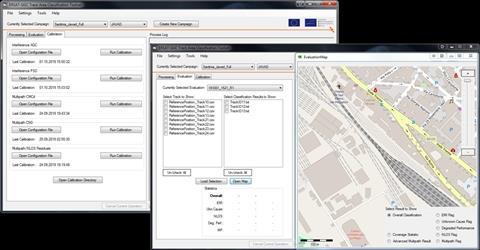 A Track Area Classification Toolset has been developed to assess how effective GNSS location is at each point along a railway.

An important precursor to ERSAT-GGC was the EU’s STARS (Satellite Technology for Advanced Railway Signalling) project, which was funded under the Horizon 2020 research programme and concluded in November 2018.

The STARS team carried out several practical trials of satellite positioning in Italy, Switzerland and the Czech Republic. These confirmed the presence of multi-path, non-line-of-sight GNSS signals and various forms of interference, reflecting experience in deploying satellite location in other transport modes. ERSAT-GGC goes one step beyond STARS by focusing on the localisation and identification of these effects along the track itself.

The project had its roots in work led by Italian infrastructure manager RFI, which began studies in this field through ESA’s 3InSat project in 2012. After obtaining encouraging initial results, RFI then launched the ERSAT (ERTMS + SATellite) programme in 2015, with the objective of seeking to wring more capacity out of existing infrastructure while driving down its costs.

Like STARS, ERSAT-GGC is a Horizon 2020 project funded by GSA, the European GNSS Agency, and co-ordinated by RFI. Concluding in November 2019, it has been executed by 14 partners across Europe, bringing together railway infrastructure managers, train operators, notified bodies, GNSS research centres, ERTMS manufacturers and various signalling test laboratories.

The goals were to consolidate the Enhanced ERTMS Functional Architecture, including the virtual balise concept, so that it is capable of incorporating GNSS Positioning and Public Radio TLC Technologies. The research was expected to pave the way for the certification of a first operational deployment on RFI’s Novara – Rho line in Lombardia.

Core tasks for the project team included undertaking a Hazard Analysis, developing a test suite to validate the Enhanced Architecture, and the development of a process to classify the track areas as suitable for locating virtual balises. This would depend on the status of critical local phenomena, such as non-line of sight signals, multipath effects and radio frequency interference. After this, a final independent assessment was undertaken by a NoBo to lay the foundations for the certification process. 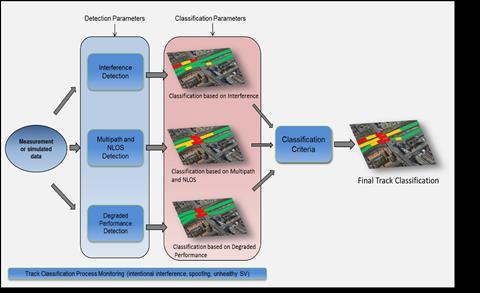 The process for colour coding each section of track is driven by a series of detection and classification parameters.

The ERSAT-GGC consortium developed a set of tests capable of detecting different so-called ‘feared events’ such as interference, multipath, NLOS and masking. These rely on heterogeneous parameters in order to make the detection more robust. As an example, multipath and NLOS can be detected using GNSS parameters such as Carrier-to-Noise ratio, which represents the power of the signal received, or residuals that represent the estimated error on the satellite-to-receiver distance measurement. Interference can be detected using GNSS receiver signal processing parameters such as Automatic Gain Control, or via analysis of the Power Spectrum Density using a spectrum analyser.

The research team planned to log any ‘feared events’ from the train as it passed over the test zone, and make a classification based on that individual run. The process would then be repeated to develop a more complete representation of the GNSS performance. Repetition is especially important, as the nature of the ‘feared events’ can change as the satellites themselves move in orbit.

The main components of the hazard detection process were:

The consortium developed a software toolkit for analysing the results, which was then assessed by independent laboratories to verify its compliance with relevant functional and non-functional requirements.

Trials in Spain and Italy

With its methodology agreed, the project team then moved to the live trials stage, which were undertaken in April and May 2019 using the Cagliari – San Gavino line in Sardinia and the Almorchón – Alhondiguilla line in Spain. The test runs were aimed at collecting data and demonstrating the capacity of the methodology to classify the track area according to the quality of the GNSS signals from the train antenna. The roof-mounted antenna was connected to a commercially available GNSS receiver inside the train.

A spectrum analyser complemented this equipment for the Italian tests, while in Spain a fish-eye camera was placed on the roof. The Sardinian test zone was a 50 km section of double track through a mostly rural area, where the train could reach a maximum speed of 150 km/h. The Spanish tests used the 96 km line between Almorchón and Alhondiguilla, a single-track secondary route where the maximum speed was just 70 km/h.

Tests runs on both routes were undertaken several times a day, giving both spatial and time representations of the GNSS signal reception. After 10 days in Spain and a week in Italy, the teams acquired enough data for post-processing using the software toolkit.

This process provided a deep insight into the local threats along the line. Analysing each run enabled the team to identify the ‘feared events’, and sections of each route could then be classified as green where no effect was detected, red where some were and yellow in uncertain cases. As more trial runs were recorded, the analysis tended to reduce the number of yellow zones and increase the level of certainty for those shown as green or red.

Moreover, the consortium partners began to gain a greater confidence that the GNSS analysis toolkit could be applied in multiple locations and railway operating conditions. 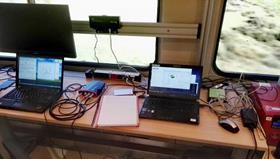 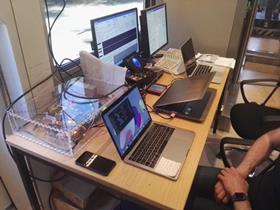 The interior of ADIF’s Talgo diagnostic train during the Spanish tests shows a GNSS splitter and Javad and Septentrio receivers connected to laptops and Gustave Eiffel University equipment for video acquisition.

ERSAT-GGC held its final conference at the GSA headquarters in Praha in November 2019, where the principal achievements were outlined.

The project has demonstrated that the Enhanced ERTMS Functional Architecture can incorporate the virtual balise as a cost-effective and low-impact option for the introduction of the GNSS positioning.

The specification of the related Functional and Non Functional Tests has been defined, validating the potential addition of ERTMS functionality within the Enhanced Architecture.

The safety of the Enhanced ERTMS Functional Architecture has been confirmed by both a qualitative and quantitative hazard analysis.

Local hazards impacting on GNSS function in a railway environment have been investigated, and a procedure has been agreed for the classification of track areas as suitable for use of virtual balises. The colour-coded classification approach mitigates the risk of GNSS flaws leading to unbounded virtual balise location errors. This should help reinforce the case for inclusion of GNSS positioning within the evolution of ERTMS.

The Enhanced ERTMS Functional Architecture, the related hazard analysis, and the toolkit for track classification have all been assessed by a Notified Body. This paves the way for their introduction in revenue service on a section of line managed by RFI. The independent assessors confirmed the validity of the approach and of the toolset principles; they can be used both within and beyond the ERSAT-GGC project, with a high level of flexibility and configurability.

A demonstration model has been completed showing how virtual balises could be located on the Cagliari – San Gavino route in Sardinia.

Further trials have now been completed on secondary lines in France to provide more data for the classification tool. In general, more green areas are being established as the amount of input data increases.

The national ERTMS Implementation Plan presented to Italy’s Ministry of Infrastructure & Transport by RFI in 2017 included a commitment to deploy ERTMS across the national network, recognising the pan-European imperative to replace legacy train control equipment. But the infrastructure manager also acknowledged the cost implications, and committed to trialling lower cost technology where appropriate.

On this basis, RFI has agreed to host a pilot project to test, validate and certify the use of satellite assets within the ERTMS architecture. To incentivise further adoption, GSA has invited tenders for the development of bespoke tools to support the use of satellite location in rail applications, for example specialist onboard receivers.

Meanwhile, further developments are in prospect. The European Space Agency is supporting the introduction of the European Geostationary Navigation Overlay Service to GNSS, and its multi-year plan includes looking at how to bring EGNOS-enabled ERTMS operations to a pre-demonstration stage in Europe.