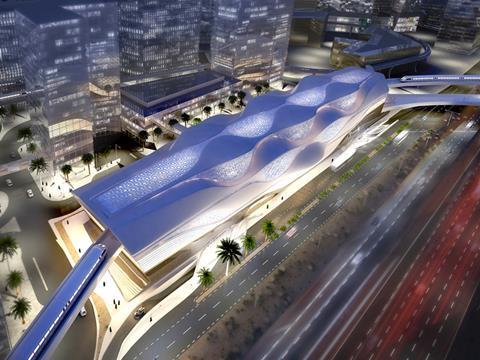 A key hub on the planned six-line metro network, KAFD station will be the terminus of Line 4 to the airport and an interchange between lines 1 and 6. Completion is planned within four years.

The 20 434 m² station will have four public levels and two levels of underground car parking. There will be a total of six platforms, and a bridge to the monorail which will provide local transport within the financial district.

The station is intended to integrate into the wider vision for the financial district, with the architectural practice saying the design 'extends beyond the simple station typology to emphasise the building's importance as a dynamic, multi-functional public space; not only an intermediate place perceived through quick transitions, but also a dramatic public space for the city.'

The station would be at the centre of a network of pathways, bridges and metro lines, with clearly delineated pedestrian routes to optimise circulation. This has resulted in a design based on a 'three-dimensional lattice defined by a sequence of opposing sine waves (generated from the repetition and frequency variation of station's daily traffic flows) which act as the spine for the building's circulation'.