The Future of Rail is Battery-Operated Technology

An Eco-Friendly Revolution is Taking the Rail Industry by Storm. 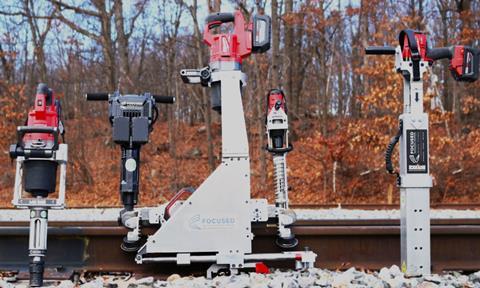 Unlike most industries who have had major technological breakthroughs over the last one hundred years, the railroad industry has been stagnant in a lot of ways. Especially when it comes to track maintenance and repair; rail crews have been using the same technology –namely hydraulics and hand tools–to do the job.

Although these methods have been industry-standard to this point, they come with severe negative factors working against them.

From a pure production standpoint, both hydraulic and hand tools are extremely inefficient.

Hydraulic tools require multiple people to operate; one person with the tool, one person with the hoses, and so on. This naturally slows down the production potential for any rail crew. All those bulky hoses and generators greatly restrict the range of a railroader, making jobs on bridges and in tunnels nearly impossible. Perhaps the worst part of working with these tools, from an efficiency standpoint, is all of the set up time it takes before you can even start the job.

On top of these obvious inefficiencies, hydraulic tools could also be really dangerous for anyone using them.

The hydraulic fluid itself is highly toxic since high-pressure oil can puncture skin if it makes contact. This could cause serious injury and long-term medical conditions.

Aside from the injury concerns about the hydraulic fluids themselves, these out-dated machines are infamously known to put a significant amount of stress on the user’s body, which can lead to injuries and other wear-and-tear over time.

While all of these above factors are huge strikes against using hydraulic tools, perhaps the biggest one of them all is what they do to the environment.

Hydraulic Emissions and Their Effects on the Industry

It’s no secret that hydraulic fluids have long been lambasted for their negative effects on the environment; and rightfully so.

One of the world’s leading hydraulic hose manufacturers published an article stating that 370 litres of hydraulic equipment leaks from equipment on a yearly basis. That’s a shocking number when you consider even just one (1) litre is capable of polluting 1 million litres of water. When the fluids leak, the soil and water instantly become contaminated.

Not only are hydraulics extremely dangerous for humans and the environment alike, they could be devastating for the wallets of major rail yards all over the world.

On the most basic level, hydraulics are extremely expensive. If one hydraulic tool uses 10-15 gallons of hydraulics fluid each day on the job, imagine how much money railroads spend on them each year?

Additionally, when the fluids leak, countries like the United States require special cleaning by the Environmental Protection Agency. This liability, along with the law suits that could potentially pile up if these toxic fluids come into contact with someone’s skin, could cost a rail yard millions.

All of these issues have led executives of major North American railroads including Canadian Pacific, BNSF and Canadian National to move in a more environmentally-friendly direction.

As the need for alternative for hydraulics has grown to exponential heights, Focused Technology Solutions, a company based out of New Jersey in the United States, has led the charge in developing battery-operated technology that not only reduces railroad emissions, but completely eliminates the need for hydraulics from multiple track repair tasks.

This revolutionary technology provides millions of dollars in savings to railroads each year.

On top of its environmental benefits, Focused Technology’s battery-operated tool line has a plethora of benefits that will help increase rail yard efficiency and production, which also positively affects the yard’s bottom line.

Since the company’s inception in 2018, each of their battery-operated tools, including the LagEase (lag inserter/remover), DrillEase (tie drill), SpikeEase (cut spike remover), EclipEase (e-clipper) and SpikeForce (spike driver) have drawn rave reviews from major North American and Australian railroads.

Each tool requires just one person to operate and is ready to use right off the truck, saving crews all the time they would have previously spent setting up their hydraulic counterparts.

The LagEase, DrillEase and SpikeEase each weigh under 13.6 kg. Their lightweight designs put significantly less stress on the user’s body, reducing the risk for workplace injury. Their portability and cordless nature allow for an increased range of motion, which especially comes in handy when working in places like bridges and tunnels.

For more information about these game-changing tools, visit focusedtechnologysolutions.com/solutions