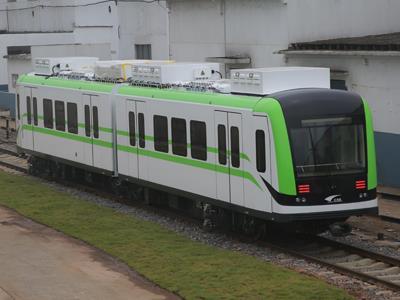 Developed in conjunction with Chinese Academy of Engineering, the trainset has underfloor power pick-ups which are used to charge the roof-mounted supercapacitor unit from a fixed supply while the train is stood at a station. Charging takes 30 sec and can power the train for 2 km. Energy regenerated during braking is recovered for reuse.

The two-car articulated trainset which was rolled out on August 10 is designed for a maximum speed of 80 km/h, with an intended operating speed of 70 km/h. It is 2 650 mm wide, has a capacity of 320 passengers and is suitable for a minimum curve radius of 80 m.

The supercapacitor has a greater power density than lithium-ion batteries, and wireless operation is seen as a cheaper and less visually intrusive alternative to conventional electrification.

Commercial production is envisaged by 2014, with the manufacturer believing the technology could be viable for use in more than 100 smaller and medium-sized Chinese cities, as well as for the export market.