Supercapacitors to be tested on Paris STEEM tram 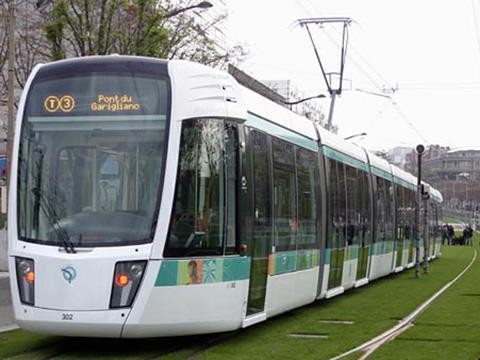 FRANCE: Paris transport operator RATP and Alstom are to launch a one-year trial of a supercapacitor on-board energy storage system, following approval by Certifer for the equipment to be used in revenue service. Developed under the STEEM research and development project, the supercapacitor technology has been fitted to one of 21 Citadis 402 low-floor cars operating on tram route T3.

The STEEM (Maximised Energy Efficiency Tramway System) applied research initiative is being implemented by RATP, Alstom Transport and INRETS, with funding from Predit, the national transport research programme, and Ademe, the French public body responsible for environmental and energy management.

A bank of 48 supercapacitor modules installed on the roof of the tram will store energy regenerated during braking, and can also be topped up from the overhead wire in 20 sec during station dwell times. This allows the vehicle to run between stops without using the catenary. During the test runs, conducted under commercial operating conditions, the vehicle will operate with its pantograph lowered on two sections of T3: Georges Brassens - Porte Brancion and Porte de Choisy - Porte d’Italie. A ‘rapid-charging station’ has also been installed at Lucotte depot.

According to Alstom, the supercapacitor technology will ‘support operations in partially-autonomous mode’, avoiding the need to install catenary at complex junctions, on bridges or in front of public buildings. It will also allow wire-free operation in depot areas. Operation in ‘fully-autonomous mode’ would be possible with the use of ‘boost chargers’ at the stops. The STEEM partners believe that building new lines without catenary could reduce investment costs, as well as ‘optimising integration into the urban landscape’.