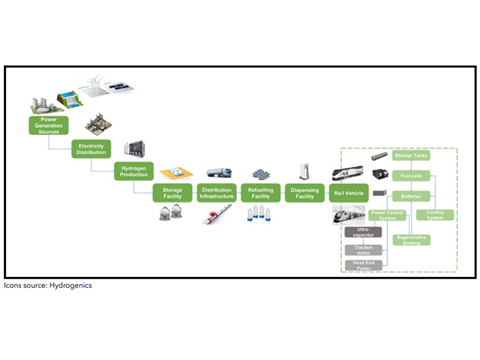 CANADA: It be would technically and economically feasible to operate the Toronto area’s future Regional Express Rail passenger services using hydrogen fuel cells instead of conventional overhead electrification, a study has concluded. The lifetime costs would be similar, but the use of hydrogen would be a ‘world first’ on such a large scale, and there are potential risks.

The planned RER network would provide all-day two-way passengers services on routes in the Greater Toronto area from 2025. In June 2017 Ontario’s Ministry of Transportation announced that as a result of recent advances in hydrogen technology, it had decided to study the possibility of using fuel cells as an alternative to conventional electrification.

The study undertaken for transport authority Metrolinx by Jacobs Engineering Group, Ernst & Young Orenda Corporate Finance and Canadian Nuclear Laboratories was published on February 22. It looked at the complete hydrogen process, including production and storage, taking into account factors including cost, risks and wider opportunities.

The study found that all the technology required for the ‘Hydrail System’ now exists, and there is a good level of confidence that it would be technically feasible to build and operate the fuel cell powered vehicles which would be required. The lifetime costs and benefit:cost ratios of a hydrogen-based system would be equivalent to conventional overhead electrification, although the economic viability of hydrogen would depend on the allocation of electricity price variability risk.

Hydrogen would avoid the cost of infrastructure works on the live railway, and would reduce the number of trees which would need to be removed. The RER project could also could act a catalyst for wider technical development and the adoption of hydrogen in other sectors.

Conventional electrification would eliminate the need for refuelling, while offering lower rolling stock capital costs. The cost of future equipment renewal would also be lower.

The study recommends that more exploratory work is undertaken to reduce risks. The province is currently engaging with Alstom and Siemens to produce concepts for a fuel cell locomotive and double-deck multiple-units, and the study says work should continue to design hydrogen production and refuelling systems. Metrolinx should also work with regulators to clarify the safety rules and to develop a framework for bid proposals.

The study and an associated hydrogen symposium had shown that it was ‘worthwhile to take a more in-depth look at using hydrogen fuel cell powered rail vehicles to electrify the GO Transit network’, said Metrolinx President & CEO Phil Verster. ‘The opportunity to further examine the scope, costs, benefits and risks of this technology is something my team and I are looking forward to in the coming months. We want to make sure we are making the best decision for Ontario communities.’