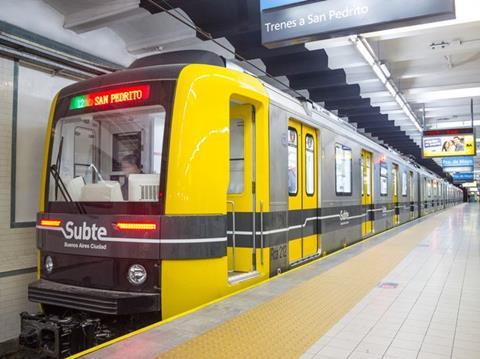 ARGENTINA: Tendering for a 12-year concession to operate and maintain the Buenos Aires metro network has been launched by the city government. Due to start on January 1 2019, the new contract is being tendered by metro authority SBASE, which will be responsible for setting service levels and fares. As well as the existing metro and Premetro networks, the new operator would be responsible for operating any extensions or new lines. Recording 1∙2 million passenger-journeys in 2017, the Buenos Aires metro network currently comprises six lines with a total of 54 km and 86 stations.

According to the city government, the new contract would include a three-year extension option ‘to incentivise better investment’, with the operator to be paid a monthly fee based on the number of train-km operated. Bidders should have a minimum of 15 years’ experience of operating and maintaining underground metro networks, carrying at least 180 million passengers a year and extending for at least 30 km with 25 stations.

Bids are due to be submitted by 11.00 on July 3 when the technical portion will be opened. The financial component is due to be opened in August, with the city government hoping to sign a contract with the new operator in October.

Since 1994, the Buenos Aires metro network has been operated by Metrovías under a concession awarded by the national government.