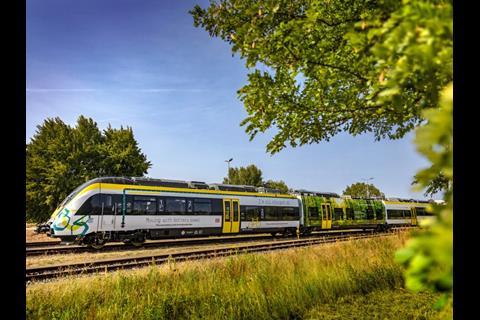 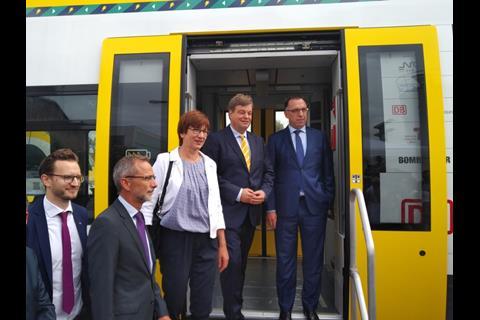 The trainset has been developed over the past two years by a partnership including DB Regio subsidiary DB ZugBusRegionalverkehr Alb-Bodensee, Nahverkehrsgesellschaft Baden-Württemberg, the National Organisation for Hydrogen & Fuel Cell Technology and the Berlin Technical University, supported by €4m from the federal government’s innovation programme for electromobility. Following commissioning tests, it is expected to enter revenue service with DB in 2019 for a 12-month trial on regional services in the Alb-Bodensee area.

The unit is equipped with four roof-mounted Bombardier Mitrac traction batteries, which can be charged from the 15 kV 16·7 Hz overhead line or using regenerated braking energy. These give a range of around 40 km off-wire, but the project partners anticipate that battery development will increase the range to up to 100 km in future.

According to the manufacturer, the Talent 3 BEMU is around 50% quieter than modern diesel trains. A comparative study by the Technical University of Dresden indicates that the battery-powered trainset is also more economical in terms of total costs over a service life of 30 years.

‘We want to continue to electrify rail transport’, said Ferlemann. ‘On non-electrified or partially-electrified routes, the motto is: move away from diesel on the tracks and toward cleaner and more environmentally-friendly mobility. A train that can charge its batteries from the overhead line while driving is a huge step toward this.’ At present around 40% of the German rail network is not electrified.

‘With our new battery-operated train, we are putting real innovation on the tracks’, said Michael Fohrer, Head of Bombardier Transportation in Germany. ‘This train is Bombardier’s technological response to challenges such as air pollution, climate change and scarcity of resources.’