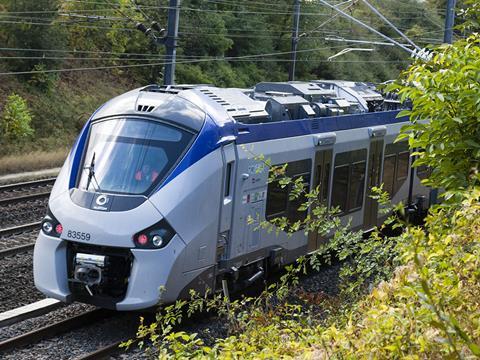 FRANCE: Alstom has been awarded a €170m firm order to supply 16 six-car Coradia Polyvalent multiple-units to the Bourgogne-Franche-Comté region.

The latest contract announced on May 10 is the first for this six-car electric variant of the Cordia Polyvalent family. The EMUs will have 355 seats, with the ‘inter-city style’ interior offering large windows, indirect lighting, reclining seats with arm rests, power sockets and coat hooks. They will also be the first Coradia Polyvalent trains to comply with the 2014 PRM TSI, requiring a more spacious toilet.

The region had previously ordered 24 four-car EMUs, 18 of which have now been delivered.

‘This latest order expands our range of Coradia Polyvalent regional and Intercité trains’, said Jean-Baptiste Eyméoud, President of Alstom in France. ‘The new high-capacity trains provide excellent comfort, comply with the latest required standards and specifications for persons with reduced mobility, and will use all the latest information and connectivity technology. The new order will also boost activity at Alstom plants in Bourgogne-Franche-Comté.’

A total of 328 Coradia Polyvalent trains have now been ordered under a framework contract which SNCF awarded to Alstom in October 2009, with 267 Régiolis units ordered by nine regions and 61 Coradia Liner units by the national government. Alstom has also won export orders to supply 17 trains to Algeria's SNTF and 15 for APIX in Senegal.