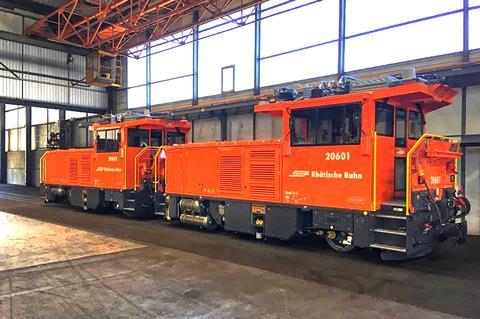 The SFr21·5 order for the metre-gauge locomotives was placed in September 2018, with RhB undertaking procurement in co-operation with Matterhorn Gotthard Bahn which ordered two similar locos. RhB estimates this co-operation reduced the cost by SFr1m.

The locomotives will primarily use overhead electric power, with the auxiliary lithium-ion battery providing power when the electrification is switched off or on non-electrified tracks. This is expected to be more cost–effective and environmentally friendly than the use of auxiliary diesel engines.

The locos are rated at 500 kW and have a maximum speed of 80 km/h during overhead electric operation and 40 km/h and 200 kW when using battery power.

RhB plans to withdraw 11 older shunters when all seven of the Geaf 2/2 locomotives are delivered to Landquart, Untervaz, Chur, Thusis, Zernez, Davos and Ilanz.