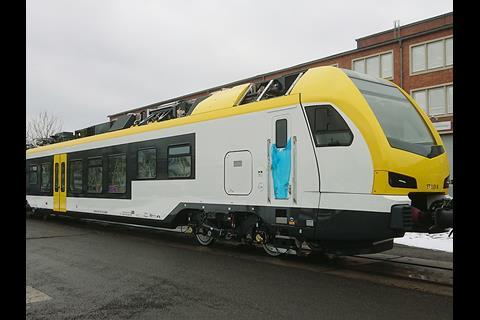 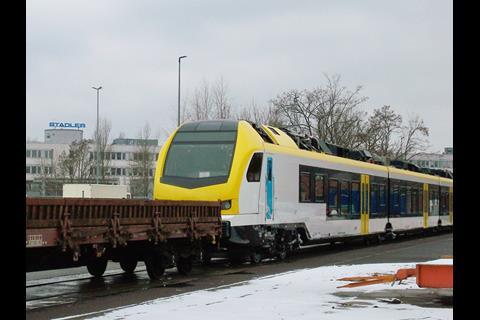 GERMANY: The first of 45 Flirt3 electric multiple units ordered by UK-based transport group Go-Ahead as part of its entry into the German passenger market has been completed at Stadler’s Pankow factory in Berlin.

In May 2016 Go-Ahead awarded Stadler a contract to 11 three-car and 15 five-car Flirt3 EMUs for the Lot 1b services and nine four-car and 10 six-car units for Lot 1c. Stadler will maintain the units under a separate contract awarded in May 2017.

The 160 km/h EMUs will have 165, 217, 273 or 329 seats depending on their length, with air-conditioning, accessible toilets, mobile phone signal boosters, wi-fi, folding tables, power sockets and cycle spaces. They will carry the Land’s lion livery and branding.

‘We are delighted that together with our partner Stadler we are making such good progress with vehicle construction’, said Dr Peter Raue, Technical Director of Go-Ahead Baden-Württemberg, when the first unit was unveiled on March 23. ‘Passengers in Baden-Württemberg can look forward to new, completely modern and comfortable trains as of July 2019.’

Go-Ahead has begun recruiting staff, and on a March 20 held a recruitment day to for people interested in careers as train drivers. A training programme is to be offered in partnership with MEV and other train operators.