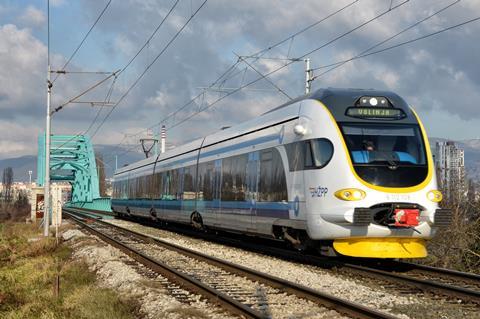 The order signed on April 29 is being financed with loans from Eurofima (€57·2m) and the International Bank for Reconstruction & Development (€5·2m).

Končar began developing its multiple-units in 2008, with a prototype sold to Bosnian operator ŽFBH and two regional and suburban prototypes delivered to HŽPP in 2011.

In January 2014 HŽPP signed an €213m agreement to buy 44 diesel and electric multiple-units.

However, production of the remaining 19 units was stopped because of financial difficulties at HŽPP.

‘We still need to secure funding for the remaining seven DMUs from the original contract’, said HŽPP CEO Željko Ukić when the latest agreement was signed. ‘But with the new trains we will significantly increase the passenger comfort and the quality of our service.’

Tenders have also been called for 21 EMUs, which would be funded from EU sources.