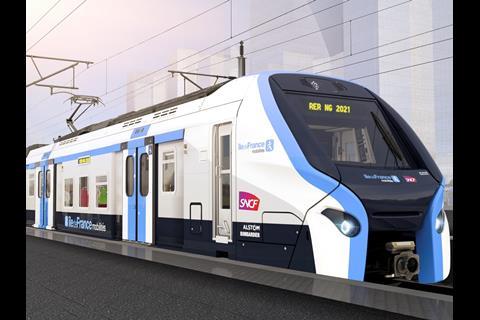 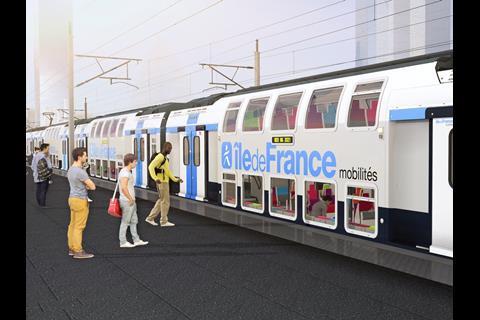 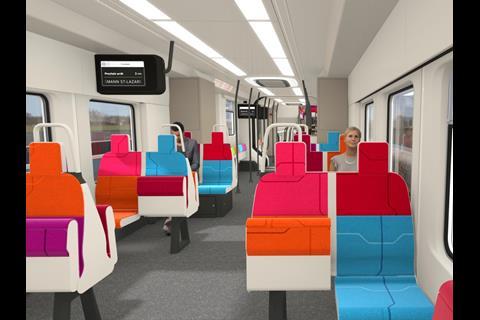 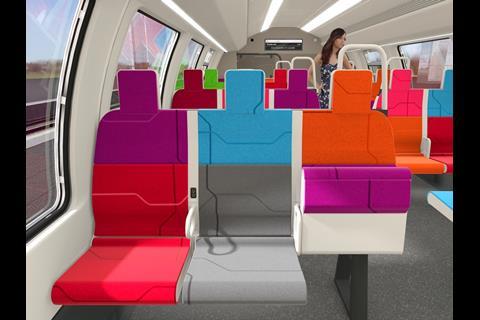 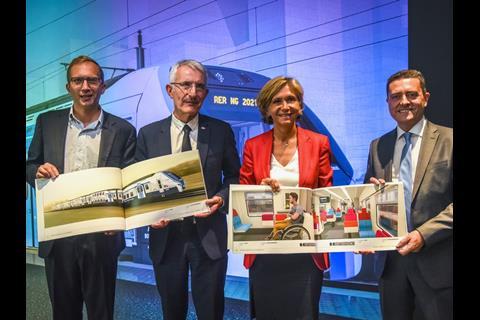 FRANCE: The final design for the next generation of double-deck EMUs to operate on the Paris RER network was unveiled by Ile-de-France Mobilités on June 8, at an event to mark the start of construction of the pre-series trains.

Designated RER Nouvelle Génération, the EMUs are being supplied by a consortium of Alstom and Bombardier under a €3·75bn framework contract awarded in January 2017 by SNCF Mobilités on behalf of the regional transport authority. This envisages 125 seven-car sets of 130 m for Line D and 130 six-car units of 112 m to work the extended Line E, although the partners add that the final mix may evolve if the requirements change. The initial firm order covering 15 long and 56 short sets is valued at €1·15bn.

According to Ile-de-France President Valérie Pécresse, the region is investing in an ‘unprecedented’ modernisation programme that is due to see more than 700 new and refurbished trains enter service across the capital’s suburban rail network between 2016 and 2021.

The RER NG sets will be assembled at Alstom’s Petite-Forêt plant in Valenciennes and Bombardier’s nearby Crespin facility. The pre-series trains are due to be ready for testing and commissioning during 2019, when assembly of the series build is scheduled to start. These would be accepted during 2020 ready to enter service the following year. Deliveries at an average of three units a month are scheduled to match the extension of RER Line E to Nanterre in 2022 and Mantes-la-Jolie in 2024, helping to alleviate overcrowding on the western part of Line A. By the time that deliveries are complete, lines D and E are forecast to be carrying around 1·23 million passengers/day.

Detailed design has been finalised by a ‘voluntary and non-contractual’ working group established in April 2017 to bring together representatives from Ile-de-France Mobilités, SNCF, Alstom and Bombardier. This has used a mix of computer-aided design, virtual reality and 3D printing to optimise the design ‘with attention to every detail for a fluid train with soft curves’, according to the partners.

Derived from Bombardier’s Regio 2N design and Alstom’s X’trapolis family, the RER NG has a mix of single and double-deck cars adapted to meet the specific requirements of Ile-de-France. The single-deck cars will have 2 m wide doorways for rapid boarding and alighting, linked by full-width gangways to double-deck vehicles offering ample seating and standing space. Each unit will have ‘four distinct travel areas’, differentiated by the lighting and interior furnishing. As well as the vestibule areas, the lower decks will be configured as a ‘crossover zone’, with a mix of seating and standing space; more seats will be providing on the upper deck for longer-distance travellers. USB sockets will be provided for charging laptops and mobile phones. Wheelchair spaces will provided in the outer ends of each driving vehicle.

Describing the concept as ‘a major technological leap, which will revolutionise train travel’, SNCF President and SNCF Mobilités CEO Guillaume Pepy said the RER NG would be ‘the showcase of French know-how in mass transit’. Two units in multiple would be able to carry 1 860 passengers, ‘the equivalent of almost four Airbus A380s’, he pointed out, adding that the Nexteo moving-block signalling would allow operation at headways of just 108 sec on the RER network, ‘preparing for the future of autonomous trains’.