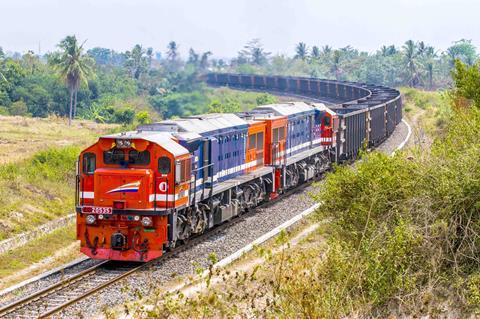 INDONESIA: National railway PT KAI and Progress Rail have signed a contract for the supply of a further 36 EMD GT38AC diesel locomotives.

The 1 067 mm gauge locomotives, known as Class CC205 in Indonesia, are to be delivered in late 2021, and will be used to haul coal trains in South Sumatra.

They will join a total of 55 other GT38AC locos delivered in three batches in 2011, 2013 and 2014, including five which were provided as compensation for delayed delivery of the others.

The GT38AC was designed specifically for Southeast Asia and Sub-Saharan Africa, with an eight-cylinder EMD 8-710G3A-T2 engine and durable AC traction, along with a cab and body designed to offer improved visibility. The traction power output is 1 490 kW, and the maximum speed is 80 km/h.

‘We welcome the opportunity to once again work with PT KAI, delivering another wave of our GT Series locomotives, which have demonstrated strong performance, reliability and efficiency in global service’, said Marty Haycraft, President and & CEO of Progress Rail, when the latest contract was signed on April 16.