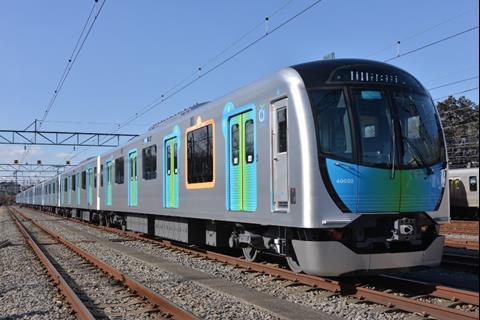 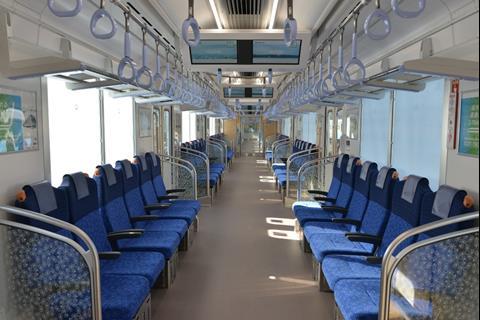 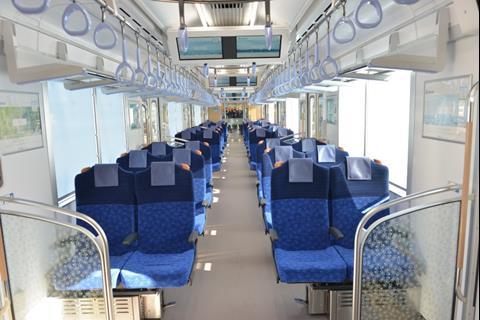 JAPAN: The first of eight Series 40000 EMUs being built for Seibu Railway’s 1 067 mm gauge Tokyo suburban routes was unveiled on February 13. The 10-car sets are scheduled to enter revenue service from March 25.

An evolution of the railway’s earlier Series 30000 design, the aluminium-bodied trainsets are the first to be supplied to Seibu by Kawasaki Heavy Industries’ plant in Kobe. Ordered in 2015, the first unit was delivered to Kotesashi depot in September 2016.

Taking power at 1·5 kV DC overhead, the trains are designed to run at a maximum speed of 120 km/h. They are fitted with VVVF traction controls and totally-enclosed permanent-magnet motors supplied by Toshiba. Each train has three sets of traction equipment incorporating ‘four-in-one’ inverter packs which share a cooling system and are thus smaller and lighter than earlier types. Each inverter pack can drive up to eight motors. Improved regenerative braking controls are expected to improve energy efficiency, with the complete traction package expected to reduce power consumption by up to 50% compared with the railway’s older trains.

The vehicles are 20 m long and 2 808 mm wide, with four sets of doors per car side to facilitate rapid boarding and alighting. To ensure maximum standing capacity at peak times the units are fitted with longitudinal seating. However, the traditional bench seats have been replaced by pairs of individual seats which can be rotated into an airline-style transverse 2+2 configuration at quieter times. LED lighting is used throughout, with passenger information displays above each doorway.

Accessible ‘partner zones’ with perch seats and space for wheelchairs, prams or bulky luggage are provided in the end cars. According to Kawasaki, these vehicles are fitted with Plasmacluster air-purification technology.

The Series 40000 trains are intended to operate on Seibu’s Ikebukuro, Shinjuku and Hajima lines, and are also cleared for through running on the Tokyo Metro network. The railway expects to operate through trains between the Ikebuburo Line and the metro’s Yurakucho Line on weekdays. At weekends the units will be deployed on a supplementary-fare premium ‘S-Train’ service between Seibu’s Chichibu Line and Yokohama’s Minato Mirai Line via the Tokyo Metro Fukutoshin line and Tokyu Railway’s Toyoko Line, a total distance of 113·8 km.