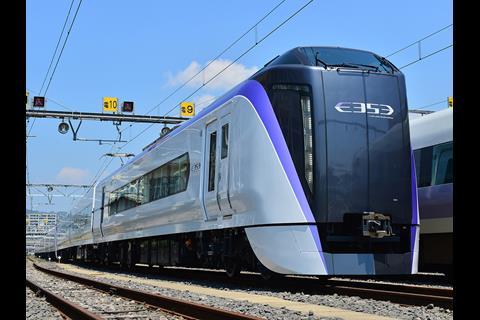 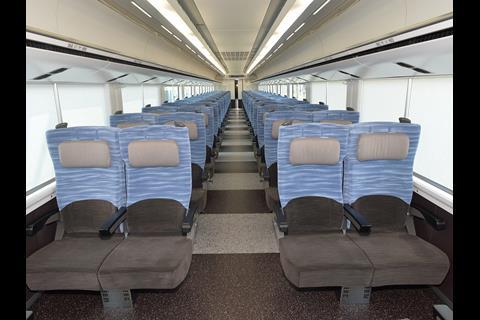 JAPAN: A pre-series Series E353 tilting EMU to operate Azusa limited express services on the eastern portion of the 1 067 mm gauge Chuo Main Line between Tokyo and Nagano has been unveiled by East Japan Railway.

The Series E353 sets are being built by the railway’s rolling stock subsidiary J-TREC, with exterior styling by industrial designer Ken Okuyama. Intended to replace the E351 units which date from 1993, the 1·5 kV DC sets have VVVF inverter controls and three-phase traction motors

Whereas the E351s are formed of three-car and eight-car units coupled to form 11-car trains, the E353 has a base nine-car set with a three-car add on unit to permit 12-car operation. The three-car set has all cars motored with one powered bogie each, while the nine-car set has five powered cars and four trailers, including both driving vehicles.

All cars ride on bogies fitted with a pendular pneumatic swing suspension allowing operation at 130 km/h, while four cars have an ‘anti-rock’ active suspension. These are both driving cars and the green car in the nine-car unit and one driving car of the three-car set, to ensure that the end vehicles are always so equipped.

A 12-car set is designed to carry 656 standard and 30 green class passengers. LED lighting is fitted throughout, along with LED display screens providing passenger information. All seats are provided with power sockets and tables so that passengers can use their own laptops.

Following commissioning tests, the new units are expected to enter service in the spring of 2016.