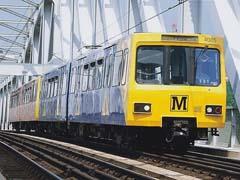 Government funding was conditional on operations being put out to tender. The £580m includes £350m for the 11-year 'Metro: all change' renewal and modernisation programme, plus £230m in operating subsidy over nine years.

The contract runs for seven years with an optional two-year extension. Nexus will continue to own the metro and set fares and service specifications, paying DB Regio Tyne & Wear a fee including bonuses and penalties based on targets for service quality and revenue protection.

'This has been a long process at a difficult time but we have won significant improvements in passenger service and excellent value for money', said Nexus Director General Bernard Garner.

Around 400 staff including drivers, operations controllers, train maintenance and station staff will transfer from Nexus to DB Regio Tyne & Wear, which has committed to no compulsory redundancies during the life of the contract. A further 270 will remain with Nexus, including infrastructure maintenance personnel.

'DB will be able to use our experience on London Overground and Chiltern Railways in fine-tuning Metro operations to achieve standards set when it first opened in 1980, when it was rightly considered among the best in the world', said Adrian Shooter, Chairman of DB Regio Tyne & Wear.