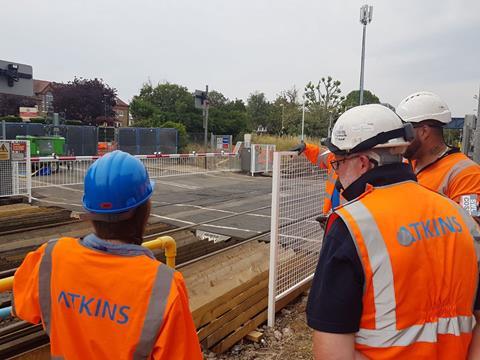 UK: The first implementation of Atkins’ digital interlocking technology on a UK passenger-carrying line was commissioned on June 22-23.

Atkins’ Strategic Rail Market Director Scott Kelley said the deployment was ‘a step change for the domestic signalling market’, with the project being ‘unique in that it involved new technologies, software systems and working methods being specifically developed, tested and coming together at the same time.’

The control system running on Alstom ElectroLogIXS hardware covers a short section of line between Fulwell and Strawberry Hill in southwest London. The interlocking operates with Newgate level crossing barrier machines, Frauscher axle counters, Camlin remote condition monitoring and CCTV transmission. It is controlled by a VDU-based signalling workstation within Feltham signal box, but control will eventually to be transferred to the Basingstoke Rail Operations Centre.

The commissioning forms the first first stage of Network Rail’s Feltham area resignalling project which is being undertaken over several years. It follows a successful roll-out of the Atkins technology on non-passenger lines within the Crossrail depot at Old Oak Common.

The deployment is the fruit of a major project launched by Atkins in 2011, when Network Rail announced that it intended to stop using legacy Solid State Interlockings. Atkins had the rights to the SSI technology and realised that it needed to develop a modern replacement to retain its position in the signalling sector.

The company’s approach was not just to develop new technology, but was ‘about transforming our business in the signalling arena’, Signalling Business Director Matthew Phillips told Railway Gazette International.

The company has developed technologies for digitising the design and verification of control systems, producing a library of approaches which can be combined to streamline the design of future systems. The hardware is modular and connected with IP networking, enabling equipment to be placed in easily-accessible locations to reduce the amount of time that staff need to spend trackside.

Atkins estimates that this approach offers a 20% capital saving compared to older systems, with a 65% life-cycle cost saving over 30 years.

A simulator allows signallers to be trained to operate the system, and maintenance staff to be trained in fault-finding. The skills needed to design, deploy and maintain signalling and other railway systems are changing, said Phillips, pointing out that many of these skills are transferrable to other safety-critical industries which he hopes will help to make railway engineering a modern attractive career prospect.

Huw Edwards, Network Rail's Programme Director for signalling said the roll-out was ‘a true example of first-rate collaboration between Atkins, Network Rail and the wider supply chain’. He felt there was ‘no doubt that this sets the gold standard for future collaboration both in the further roll-out of the ElectroLogIXS product, as well as the future deployment of new signalling technology.’