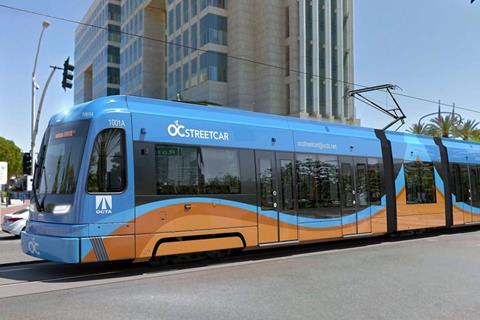 USA: California’s Orange County Transportation Authority has selcted Herzog Transit Services for a $45m contract to operate and maintain the 6·7 km OC Streetcar which is under construction in Santa Ana and Garden Grove for opening in 2022.

Herzog Transit Services beat two other bidders for the contract, which has a pre-revenue period of approximately 17 months, followed by five years of revenue operations and two options each for a further two years. The company already operates the KC Streetcar in Kansas City and the OKC Streetcar in Oklahoma City

The 6·7 km tramway linking Santa Ana Regional Transportation Center and Harbor Boulevard is being built by Walsh Construction Co under a $220·5m contract. Siemens is to supply eight S70 bidirectional low-floor trams, which will be 26·8 m long with capacity for 180 passengers including 70 seated.

Services will run every 10 to 15 min, serving 10 stops in each direction and requiring six vehicles to be in service at once. Initial ridership is forecast at 7 300 passengers per day.

The $408m project is being funded from a local 0·5% sales tax in addition to state and federal sources including a $149m grant from the Federal Transit Administration.

‘The OC Streetcar will provide Orange County residents with an important additional transit option, and this is another exciting milestone’, said Mayor of Garden Grove and OCTA Chairman Steve Jones after the operating contract was approved on May 22.