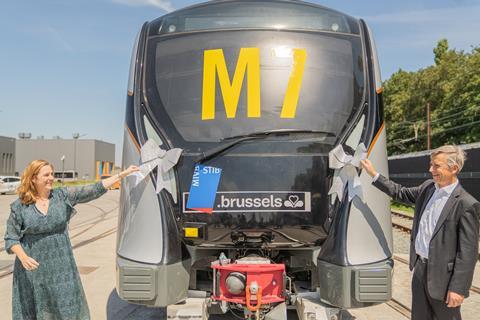 BELGIUM: The first of 43 six-car Type M7 trainsets for the Brussels metro has arrived at the Haren depot for commissioning, operator STIB announced on July 13.

The M7s were ordered from CAF under a 12-year framework contract placed in 2016, with a view to increasing capacity on lines 1, 2 5 and 6. The first tranche of 22 trainsets is due to be in revenue service by the end of 2022, but no date has yet been set for delivery of the remaining 21.

A driverless version of the M7 is due to be deployed on Line 3, following conversion of the north-south premetro tram tunnel into an automated metro line connecting Bordet and Albert.

The M7s have been restyled by Axel Enthoven to provide more space for passengers, together with multipurpose spaces for people with reduced mobility, buggies and bicycles. This has increased capacity from 716 passengers for the M6 to a total of 742 including folding seats, with a further increase to 758 envisaged for the automated version with no cabs.

The 18 double doorways per side have been widened from 1 450 to 1 600 mm and the floor height lowered from 1 050 to 1&nsbp;030 mm above rail to provide level boarding, which should make it easier for passengers to board and alight. Following a public vote in 2017, the trains will be finished in a silver livery rather than bronze. 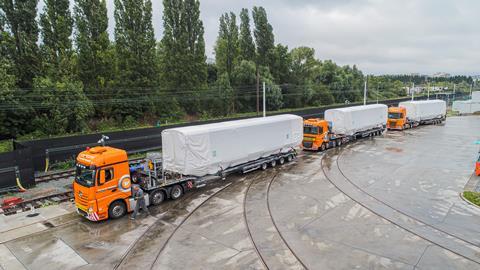 The six vehicles for the first trainset were delivered to Haren at the beginning of July, and STIB anticipates that the train will be ready for functional testing on the depot test track by mid-month. This phase is due to be completed by the end of August, after which the train will be transferred to Delta depot for three months of testing on the metro network without passengers.

The first unit is expected to enter revenue service at the beginning of 2021, operating from Erasmus depot on lines 1 and 5. After the first five trainsets have been commissioned, STIB anticipates that the delivery rate will step up to two trains every seven weeks, so that all 22 sets will be ‘on the network by the third quarter of 2022’. 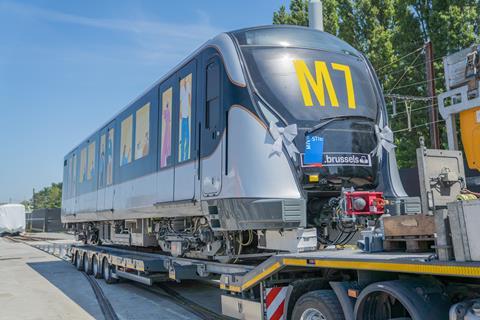 The M7 sets will initially deployed on the east-west lines 1 and 5, displacing some older trains to the ring lines 2 and 6. This will allow the peak headway to be cut from 3 min to 2 min 30 sec during the course of 2021. According to STIB, increasing the service from 20 to 24 trains/h will boost capacity on the ring line from 14 000 to 17 000 passengers/h in each direction.

Following the completion of signalling improvements, the peak headway on the common section of lines 1 and 5 between Gare de l’Ouest and Merode will be cut from 2 min 30 sec to 2 min. This increase from 24 to 30 trains/h in each direction will add capacity for a further 5 000 passengers/h in each direction to the current 16 500.

‘With the arrival of the new metro trains, we are witnessing a new step in the development and modernisation of the Brussels metro’, said STIB CEO Brieuc de Meeûs. ‘The M7 is more modern, more comfortable, well-lit, and more accessible, allowing us to increase the frequency and the number of places on offer.’

‘This is a great day for STIB and for Brussels’, added Elke Van den Brandt, Minister of Mobility for the Brussels Capital Region. ‘Increasing capacity on the metro is important in order to continue offering a comfortable and punctual service to the growing number of passengers using our public transport network.’