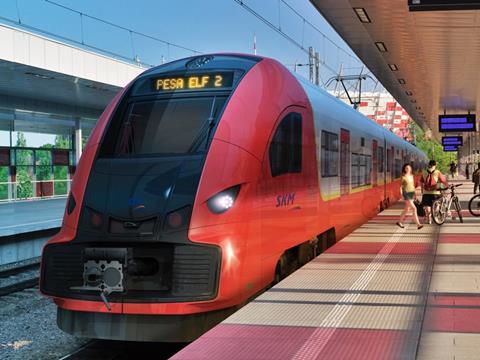 POLAND: Suburban rail operator SKM Warszawa signed a contract with Pesa on May 21 for the supply of up to 21 Elf2 electric multiple-units.

Deliveries of the base order of eight five-car and five four-car trainsets are due to be completed within two years. The contract is worth 310·5m złoty excluding VAT, and includes 15 years of maintenance and staff training, including use of driver simulators.

The order includes options for one four-car and seven five-car EMUs, which would be delivered by the end of 2023. Newag had also submitted a bid for the contract.

‘This is the largest purchase in the history of our rail operator’, said Warszawa Deputy Mayor Renata Kaznowska. ‘The new trains will significantly increase journey potential and will enable more destinations to be served, such as Piaseczno and Ożarów Mazowiecki.’

The air-conditioned trains would be equipped with wi-fi, USB charging sockets and ticket vending machines. They would be stabled at Szczęśliwice depot, which was modernised last year at a cost of 44·9m złoty. The rolling stock order and depot modernisation have received a total of 202·7m złoty from EU funds.