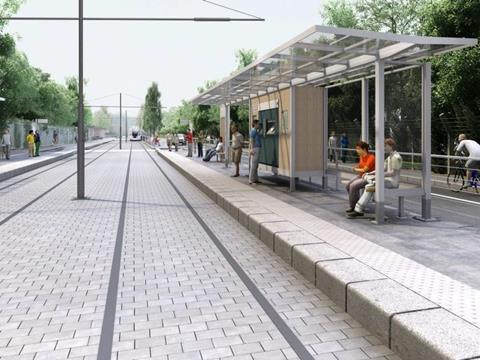 FRANCE: Preliminary work including vegetation clearance is due to start this autumn for T13 Express, which will see tram-train services introduced between Saint-Cyr-L’Ecole and Saint-Germain-en-Laye in the western suburbs of Paris.

Formerly known as Tangentielle Ouest, the project has been renamed to reflect the use of vehicles capable of running on heavy rail infrastructure as well as new on-street alignments. This brings it into line with the T11 (Epinay – Le Bourget) and T12 (Massy – Evry) projects elsewhere in the Ile-de-France region.

On T13, services will run from the existing RER station at Saint-Cyr to Noisy-le-Roi on a currently disused section of the Grande Ceinture freight belt, and from Noisy to Saint-Germain GC on a section of this route reopened to passenger traffic in 2004. New infrastructure will be built from Saint-Germain GC to the station on RER Line A in the centre of Saint-Germain-en-Laye.

Total route length is 18⋅8 km, serving 11 stations of which six are new and five are to be refurbished. Tram-train services will operate every 10 min during the peaks, providing an end-to-end journey time of 30 min.

Total cost of the project is €306⋅7m, of which 49% is being provided by the Ile-de-France region, 30% by the département of Yvelines and 21% by central government. Ile-de-France transport authority STIF is funding rolling stock and meeting operating costs.