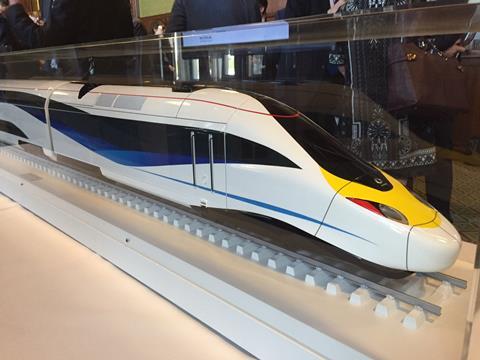 INTERNATIONAL: Alstom unveiled a high speed train concept design at a parliamentary reception in London on May 24. The double-deck trainset features short wheelbase power cars and 20 m long intermediate trailer cars, reflecting the company’s emerging thinking about the future of the Duplex family of high speed trains which it has supplied to French national operator SNCF over the last 20 years.

The event in London was intended to showcase ‘one possible option’ for rolling stock which would operate services on the future High Speed 2 network linking London with the West Midlands and northern England. Project delivery company HS2 Ltd had previously stated its intention to procure two fleets, one ‘captive’ to an international loading gauge for operation solely on the new-build infrastructure, and a ‘classic-compatible’ train to UK standards which would be able to run over conventional lines and provide through high speed services to Liverpool, Newcastle, Scotland and potentially other destinations.

However, Alstom was keen to stress that the concept train has not been developed with any specific specification in mind, and, depending on the tender requirements issued by HS2 Ltd, the company could yet offer an alternative, such as a successor to its AGV trainset with distributed traction which is used in Italy.

Nevertheless, Alstom believes its Duplex-derived option could offer significant benefits for any putative HS2 operation. By moving traction and auxiliary equipment to the power cars at either end of the trainset, interior space in the coaches could be maximised, which would permit a greater degree of flexibility in the provision of onboard services such as catering, space for passengers with reduced mobility or luggage stowage.

Alstom also believes that the design could provide a high degree of commonality between the two fleets, as the classic-compatible train could share a technically-similar power car paired with single-deck trailers equipped with active tilt. This would mitigate concerns about HS2 trains struggling to match the timings achieved by existing Pendolino tilting trains on Britain’s sinuous West Coast Main Line.

While the double-deck train on display in London is still a conceptual design, Railway Gazette understands that the single-deck proposal borrows heavily from the fleet Alstom is to supply to Amtrak for its premium Acela Express service linking Boston with New York and Washington DC. Alstom expects final confirmation of this order ‘within the next couple of months’.

International high speed operator Thalys is also understood to have had preliminary discussions regarding a next-generation Duplex as it seeks to invest in its fleet following a corporate restructuring where the business has become a single commercial entity. The ability to easily lengthen trainsets to match changing ridership patterns is a priority for the operator, Alstom believes.

‘One thing is certain, flexibility and modularity are now the absolute priority for our customers in a world of rapidly-changing passenger expectations and market competition’, says Jaime Borrell, Market & Portfolio Director for Main Line & Locomotives at Alstom. ‘The engineering and technical parameters of the train are not the dominant criteria that they may have been in the past.’