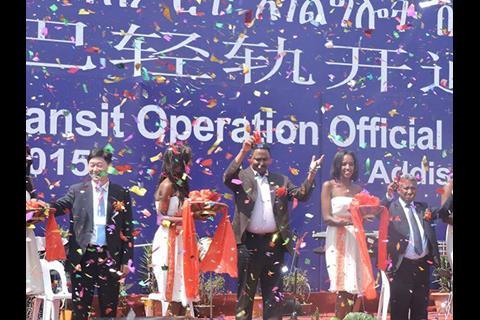 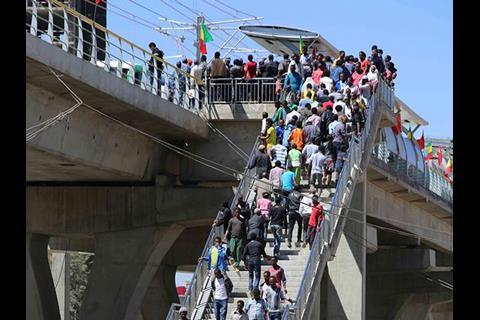 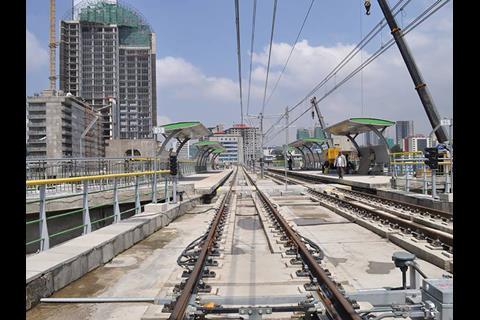 ETHIOPIA: The first light rail line in Addis Ababa was opened for revenue service on September 20, following several months of test running. Hundreds of residents queued for hours ahead of the opening to sample the new service.

Designed to relieve growing road congestion as the city’s population passes 5 million inhabitants, the 34 km two-line network serving 39 stations has been constructed by China Railway Engineering Corp at an estimated cost of US$475m. The project has been 85% funded by loans from Export-Import Bank of China.

The first route to open is the 16·9 km north-south Blue Line linking Menelik Square to Kaliti, serving 23 stations. The 17·4 km east-west Green Line from Ayat to Tor Hailoch is expected to follow within the next month. The two routes share tracks for 2·7 km in the city centre between Lideta and Meskel Square.

The network is operated by a fleet of 41 three-section 70% low-floor trams supplied by CNR Changchun. With trams running at up to 70 km/h, the two routes are designed to carry up to 15 000 passengers/h in each direction.

Services are initially operating between 06.00 and 22.00 each day, with Chinese contractors providing both the drivers and the maintenance staff. The Chinese will also be responsible for maintaining the tramway’s independent power supply network which includes four substations with a total rating of 160 MW.

Transport Minister Workneh Gebeyehu said the country was ‘very proud’ to have the first light rail network in sub-Saharan Africa. He described it as ‘a sign of modernity’, which would ‘will serve the capital city of Africa’ – Addis Ababa is the home of the African Union, for which a new headquarters building was built by the Chinese in 2012.

Insisting that ‘the light rail is not for commercial purposes’, Gebeyehu explained that ticket prices would be ‘very cheap’ in order to ‘serve people with low incomes’.