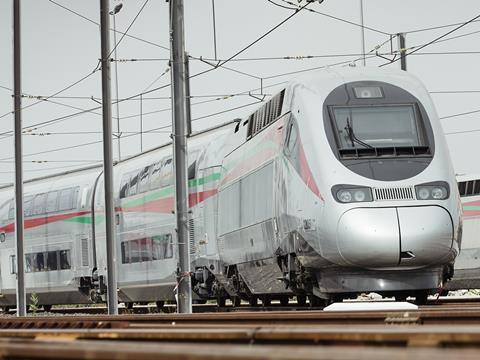 MOROCCO: The first high speed railway in Africa was inaugurated by King Mohammed VI and French President Emmanuel Macron with a ceremony in Tanger on November 15. Revenue services are expected to begin before the end of the year.

During the event the king officially named the high speed line Al Boraq, after a mythical winged creature that transported the prophets. Following the inauguration, the guests boarded a special train to Rabat.

The 186 km high speed line designed for 320 km/h operation runs from Tanger to Kénitra. This section includes 13 viaducts with a combined length of 10 km; most were constructed by Moroccan group SGTM.

The existing 137 km line from Kénitra to Rabat and Casablanca has been upgraded for 160 km/h running, with a third track added to increase capacity. The maximum speed on this section is expected to be raised to 220 km/h shortly.

Services will connect Tanger with Casablanca in 2 h 10 min, more than halving the current 4 h 45 min timing via the existing line. National operator ONCF expects to carry 6 million passengers on its high speed services during the first three years of operation.

Speaking during the opening ceremony at the renovated Tanger Ville station, Macron said the high speed railway project ‘reflects the depth of bilateral relations based on a strong partnership between the two countries’. The 22·9bn dinar new line has been partially funded by a €625m loan from France, along with 864m dinar from the Arab Fund for Economic & Social Development.

Upgrading of the existing line was partly funded by a €300m loan from the African Development Bank. Whereas the new line is energised at 25 kV 50 Hz, the upgraded route retains its 3 kV DC electrification.

The first agreement for the construction of the line was signed by representatives of Morocco and France in October 2007. The final agreement was signed on December 10 2010, when ONCF ordered 12 Avelia Euroduplex double-deck trainsets from Alstom at a cost of €400m. Alstom has also supplied ETCS Level 1 and 2 train control equipment.

Test running of the trainsets on the 3 kV network began on January 20 2016, with trials on the new line following from February 2017 and reaching a maximum speed of 357 km/h.

An additional station at Larache is planned. Construction of a Kénitra – Casablanca extension of the high speed line is scheduled to begin in 2020, and on completion this would shorten the Tanger – Casablanca journey time to 1 h 30 min.