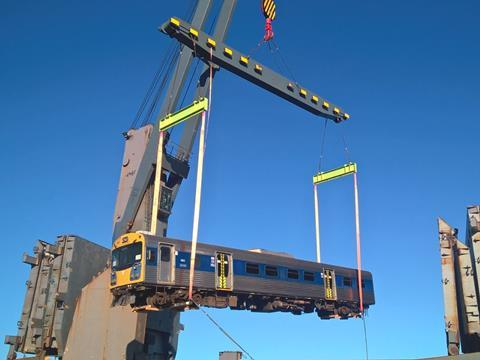 MOZAMBIQUE: Eight diesel multiple-units as well as spare parts are being shipped from New Zealand to Mozambique, where they are to operate passenger services around Maputo.

The 1 067 mm gauge two-car units have been surplus to requirements since electrification in Auckland in 2014.

‘Selling the trains reduces Auckland Transport’s costs, as these have been stored in Mount Maunganui since the new electric trains began operating’, said Brendon Main, Group Manager, AT Metro Operations. ‘The diesel trains served Auckland well between 1994 and 2014. With the introduction of the new electric fleet, the diesel trains were retired from the network, except for the ones which currently operate between Papakura and Pukekohe. Since the city’s rail network was electrified we’ve seen incredible growth in patronage, we’re nearing 20 million rail trips a year.’

Six ex-Queensland Railways SX vehicles and 104 ex-British Rail MkII coaches built in the 1970s and shipped to New Zealand in the 1990s remain in storage at Taumaranui. AT has recently entered into conditional sales agreements for 31 of these vehicles, and has received expressions of interest in the remaining 79.