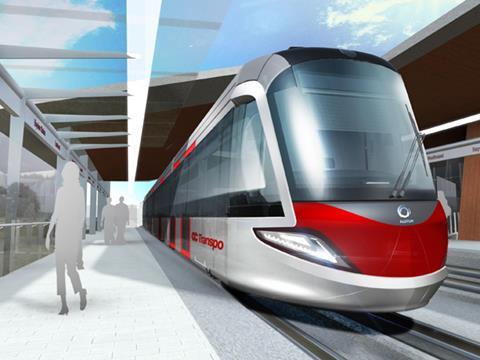 CANADA: Alstom announced the launch of its Citadis Spirit light rail vehicle for the North American market on February 14, saying it had finalised a €400m contract to supply 34 LRVs and 30 years of maintenance services to the Rideau Transit Group consortium which has been selected to design, build, finance and maintain the €1·5bn Confederation Line in Ottawa.

With a similar configuration to Citadis Dualis tram-trains used in the French cities of Nantes and Lyon, the version of the Citadis Spirit for Ottawa will be a 100% low-floor LRV with a top speed of 100 km/h and space for bicycles. It will be equipped to operate in 'extreme' winter conditions.

The LRVs will be assembled in Ottawa from components produced in the USA.

'This project marks the successful entry of Alstom into the North American Light Rail Vehicle market', said Guillaume Mehlman, Alstom Transport North American President. 'The Alstom Citadis Spirit light rail vehicle is very flexible and can be adapted to the needs of other cities across North America.'

Construction of the 12·5 km Confederation line in Ottawa is scheduled to start this year for full service from early 2018.