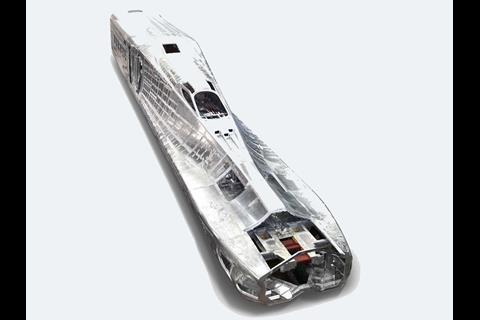 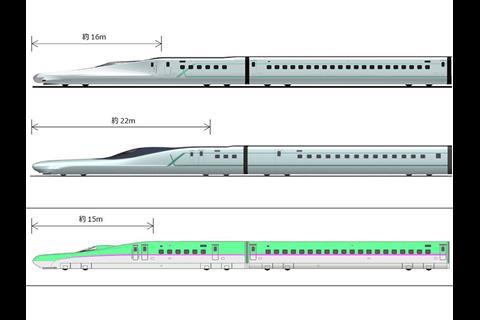 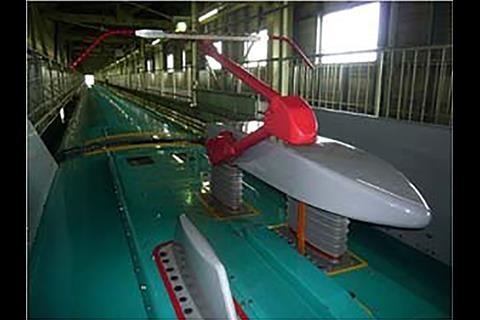 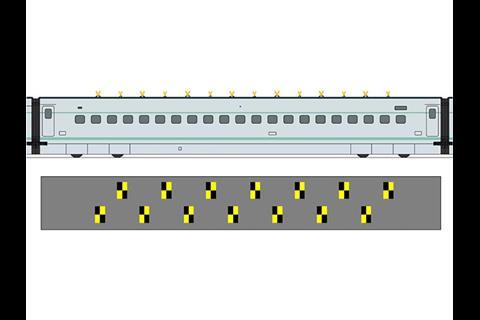 JAPAN: East Japan Railway's ALFA-X experimental Shinkansen trainset is on course to start test running in May 2019, the railway announced on October 3.

Designated Series 956, the ALFA-X is intended to pave the way for a new fleet of high speed trains as part of the railway’s Transform 2027 strategy. Having launched the project in July 2017, the railway has now completed detailed design work for the new train. It says the core objectives are to pursue ‘further safety and stability’, while improving comfort and incorporating ‘four innovative concepts’ to enhance maintainability compared to the existing fleet.

JR East intends to test the prototype at up to 400 km/h, with the intention that the next generation trains would operate at up to 360 km/h on the Tohoku Shinkansen and 260 km/h on the Hokkaido Shinkansen. While 360 km/h running was trialled during the development of its current Series E5 fleet, the railway subsequently settled for a maximum service speed of 320 km/h, citing the higher costs and increased energy consumption when running faster.

The ALFA-X testbed will incorporate two new nose designs in order to reduce the pressure waves generated when entering tunnels at very high speeds. Car 1 at the Tokyo end of the 10-car trainset will have a similar nose to the Series E5, but lengthened from 15 to 16 m. Car 10 will have a 22 m nose with a more complex shape, at the cost of a much reduced interior space. To further improve environmental performance, tests will be undertaken with two designs of low-noise pantographs.

Improved energy efficiency is a key priority, including the use of lighter materials and components. Improved traction control technology will include the use of silicon carbide power converters.

To improve ride comfort, enhanced dampers and a ‘tremble protection control device' are intended to minimise vertical vibrations, while changes to the lateral dampers will reduce any side-to-side motion. The active suspensions will also provide a degree of body tilt to allow operation through curves at higher speeds. Modifications to the underfloor structure are intended to reduce the risk of snow build-up during severe winter weather.

Learning lessons from the derailment of a Joetsu Shinkansen trainset in October 2004, JR East plans to integrate earthquake-preparedness measures in the ALFA-X, including ‘anti-earthquake dampers’ to suppress the movement of the carbody and stabilise the train if a strong force is detected. ‘Crushable stoppers’ would permit a greater degree of movement between the bogie and carbody so that any shaking of the train is not transmitted to the bogie in a way which could affect the wheel-rail interface.

As with the Fastech 360 prototypes, the ALFA-X will be fitted with aerodynamic brakes for use in an emergency. Small roof-mounted flaps would be extended upwards by hydraulic actuators. ‘Linear decelerators’ would also be fitted to some bogies, in the form of eddy-current brake shoes.

Maintenance innovations include the use of onboard sensors to collect status data and support a condition-based maintenance regime. The train will also be fitted with infrastructure monitoring equipment.

According to JR-East, the ALFA-X trainset is to be finished in bright metallic colour that reflects the local surroundings and ‘actively communicates’ the railway’s participation in the cities it serves, highlighted by ‘exhilarating’ and ‘refreshing’ green highlights. The logo will be presented in a ‘digital’ font representing the incorporation of Internet of Things and AI features in the train design. With the graduated lining becoming brighter and rising to the right, the logo symbolises a feeling that the use of advanced technology will lead to a bright future.