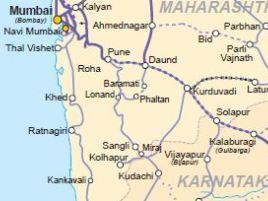 INDIA: The government has approved the construction of a 108 km rail link between Kolhapur and Vaibhavwadi, for completion in 2023-24 at an estimated cost of Rs34·4bn.

Connecting Central Railway’s current Shri Chhatrapati Shahumaharaj terminus at Kolhapur with Vaibhavwadi Road station on the Roha – Madgaon section of the Konkan Railway, the line is to be built by the Central Railway construction organisation, generating an estimated 2·6 million days of direct employment.

The line would provide a direct connection between the growing industrial belt in the Miraj-Kolhapur region of Maharashtra and west coast ports south of Mumbai, avoiding the need to route freight trains through the busy hubs at Pune and Panvel.

According to the government the link would be particularly important for the movement of thermal coal to power stations in northern Karnataka and southern Maharashtra. This is currently imported via JNPT, Krishnapatnam and New Mangalore, but could in future use the developing port at Vijaydurg, south of Ratnagiri.