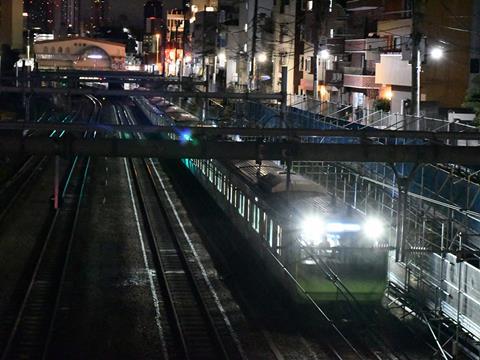 JAPAN: East Japan Railway is testing automatic train operation on the Yamanote Line in Tokyo, with a view to assessing the feasibility of converting routes to driverless operation.

The 34·5 km circular route was selected for testing because it does not share tracks with other lines. JR East envisages that automated operation could improve performance and enable faster recovery from any disruption on the line, which currently has 29 stations and is very heavily used with trains running every 2½ min in the peaks and taking around an hour to make a complete circuit.

The first tests using an 11-car J-TREC Series E235 electric multiple-unit were undertaken after the end of passenger services in the early hours of December 30, with further tests the following night. Staff travelled in the cab to monitor operations. Additional tests are scheduled for the nights of January 4/5 and 5/6.

JR East has been considering driverless operation as a way of the mitigating staff shortages which are predicted to arise as the Japanese workforce ages, and also with a view to reducing the cost of operating loss-making rural lines.

Preliminary studies have concluded that converting existing lines to driverless operation would require the development of improved obstacle detectors, grade separation and the installation of platform screen doors, as well as legal changes.

Any future roll-out of automated operation would begin on routes which do not have road crossings. Trains would initially run with an onboard supervisor able to intervene in the event of an emergency, with unattended operation in the longer term.