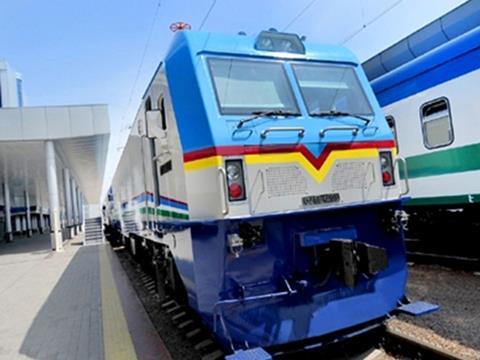 UZBEKISTAN: The first three of 11 electric freight locomotives which CNR Dalian is building for national railway UTY have been unveiled in Toshkent.

Branded as O'zel by UTY, the six-axle single-section 1 520 mm gauge 25 kV AC locomotives have Toshiba traction equipment and are rated at 7·2 MW with a maximum speed of 120 km/h.

The remaining eight locomotives are expected to be delivered by the end of this year. They are to be deployed on routes including the steeply-graded Marakand - Qarshi - Termez line where electrification is currently underway. The locomotives incorporate more modern technology than UTY's existing locomotive fleet, and the operator expects them to pay for themselves within five years.

UTY awarded China National Technical Import & Export Corp a contract to supply the locomotives in 2012, following government approval in 2011. The overall cost of the procurement was US$47·3m, with Export-Import Bank of China providing a 20-year loan worth US$42·2m.