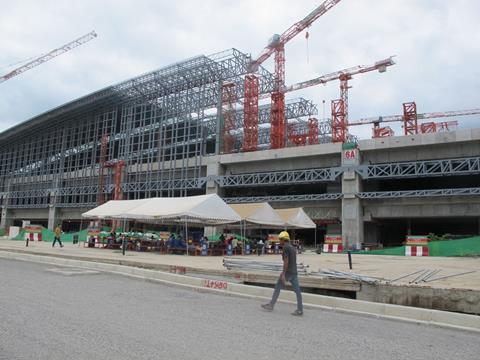 THAILAND: Construction of a new passenger hub for Bangkok is around 70% complete and on course for opening towards the end of 2020, according to municipal officials.

Bang Sue Grand Station will be a four-storey structure covering 300 000 m2 and would replace Hua Lamphong as the city’s principal main line station. The project is being co-ordinated by State Railway of Thailand, and the opening is being timed to coincide with completion of the latest sections of the Light Red and Dark Red commuter lines.

Located on the northern edge of Bangkok city centre, the Bang Sue complex has been in development for more than a decade, although it has grown in scale having originally been seen as a predominantly local hub providing links to the northern and western suburbs. The existing Bang Sue station is already served by the Blue Line of the metro and by the SRT main line running north from Hua Lamphong. The Bang Sue location has take on greater strategic importance over the past few years as various proposals for new inter-city railways have been put forward by the Thai government and international backers.

Across its four floors, the station would have a basement with parking for 1 700 cars, while ticketing and retail areas would be located on the ground floor. The next level up would comprise 12 main line platforms, of which four would be for commuter trains and eight for conventional long distance services. Together, these three decks are planned to open in 2020.

The top floor would house a further 12 platforms for proposed new lines. There is no firm date for this part of the station being completed. However, two of the platforms are already earmarked for the proposed 1 435 mm ‘three airports’ link between U-Tapao in Rayong province and Don Muang airport to the north; this would serve Suvarnabhumi international airport and would share the existing airport link between there and the city centre.

According to SRT, a public private partnership agreement for the railway is expected to be announced in January next year. SRT also plans to move its headquarters from Hua Lamphong to Bang Sue in 2020.

A detailed description of the proposed airport link appeared in the September 2018 issue of Railway Gazette International, available to subscribers via our digital archive.