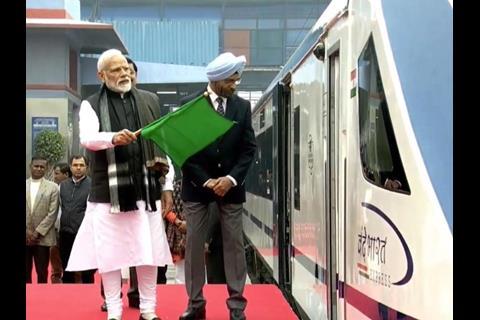 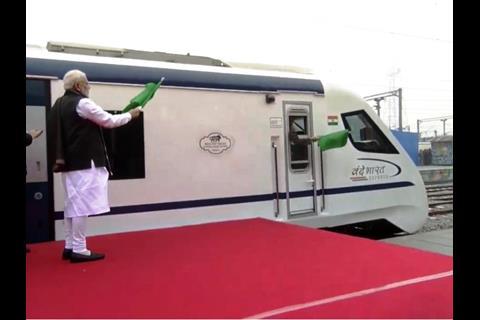 Now branded as Vande Bharat Express, the 16-car EMU was developed by the Integral Coach Factory to operate medium-distance inter-city routes at speeds of up to 180 km/h.

Speaking on board the inaugural train following the launch, Railways Minister Piyush Goyal announced that the government had decided to procure a further 100 semi-high speed trainsets in addition to the 30 for which tendering is currently underway. ICF is already assembling a pre-series build of four sets to follow the prototype.

With effect from February 17, the prototype trainset will be deployed by Northern Railway on a round trip over the 776 km route between New Delhi and Varanasi, calling only at Kanpur and Allahabad. The train will depart from New Delhi at 06.00 and reach Varanasi at 14.00, running at a maximum speed of 160 km/h. The return trip will depart at 15.00 and reach the capital at 23.00. The service will operate five days each week, except Mondays and Thursdays. Between trips the train will be serviced at NR’s Shakur Basti DEMU depot in New Delhi.

The 8 h journey time between the two cities will be a significant improvement on the current fastest train, which takes 11 h 30 min. Indian Railways is targeting the service at premium passengers, with ticket prices between 30% and 40% higher than the corresponding Shatabdi Express services. Executive and economy class fares for the New Delhi - Varanasi trip have been set at Rs3 171 and Rs1 689, compared with Rs2 505 and Rs1 220 for the loco-hauled trains.