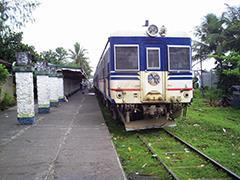 PNR was established as the state railway in 1964, tasked with managing the 1 067 mm gauge main line network on the island of Luzon, which at that time totalled more than 1 000 route-km. Over the intervening decades, a shortage of investment, competition from other modes and frequent storm damage has led to a substantial contraction in PNR’s operations, and today it runs just a limited commuter service on part of the 480 km main line between Manila and Legaspi.

A number of local politicians have been pushing for the renewal of PNR’s charter to enshrine commitments to improve the quality of rail services on Luzon. The Act is understood to require the acceleration of railway rehabilitation works; PNR has previously suggested that daily trains between Manila and Legaspi could be reintroduced from September, once bridges damaged by typhoons in 2012 have been repaired.