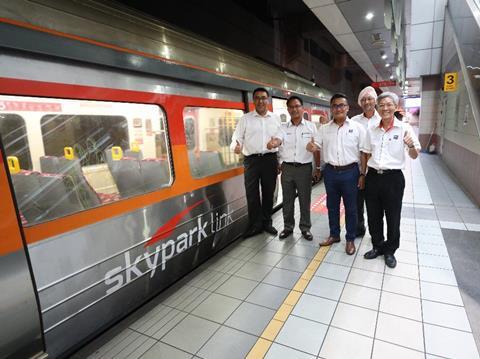 MALAYSIA: A rail link to Sultan Abdul Aziz Shah Airport in Kuala Lumpur was inaugurated on May 1. The Ministry of Transport funded the 521m ringgit project.

The route branches off from the metre-gauge line that links Kuala Lumpur with Port Klang at Subang Jaya. It runs north along the alignment of an older freight line at grade for 4·1 km to Sri Subang, before climbing onto a 4 km viaduct and terminating at Terminal Skypark. Intermediate stations at Glenmarie and Sri Subang are due to open in the future.

Services are operated by the KTM Komuter subsidiary of the national railway using four refurbished Class 83 electric multiple-units. The route becomes part of a newly designated Line 10, which runs between the airport and KL Sentral.