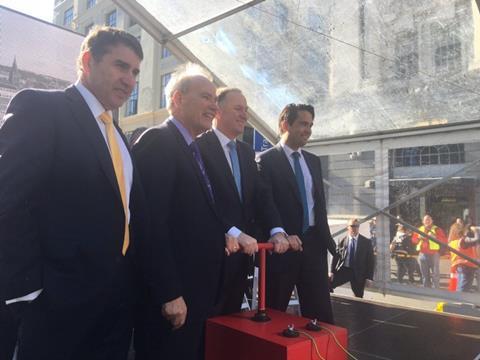 NEW ZEALAND: Work officially started on the Auckland City Rail Link on June 2 with a groundbreaking ceremony for the city centre rail tunnel.

The 3·4 km route will connect the current Britomart terminus with the Western Line at Mt Eden. This is expected to double capacity on the rail network, reduce headways and cut journey times by eliminating the need for trains to reverse at Britomart.

The project is estimated to cost NZ$2·5bn. Two new underground stations would be built at Aotea and Karangahape Road, and Mt Eden station is to be rebuilt. The tunnels would be a mix of cut-and-cover and bores.

‘With Auckland’s population predicted to grow by more than 700 000 people over the next 30 years, the CRL will play an important role in getting people in and out of the city with ease’, said Transport Minister Simon Bridges.