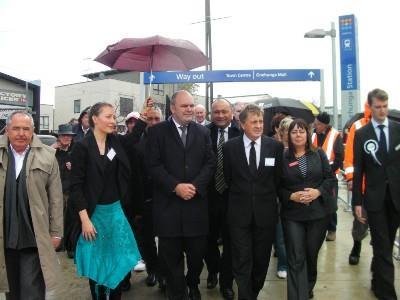 NEW ZEALAND: Regular passenger services have resumed on the Onehunga branch in the southern suburbs of Auckland, with the reopening of the branch following a gap of 37 years.

The line was officially reopened on September 18 by transport minister Steven Joyce and the Chairman of Auckland Regional Council Michael Lee. After the formal inauguration there were public celebrations, free rides and a steam excursion, with revenue services starting the following day.

Diverging from KiwiRail’s Southern Line near Penrose, the 20 km single-track branch runs southwest along the northern shore of Manukau Harbour, and dates from 1873.

The line has been reopened as part of Auckland Regional Transport Authority’s programme to expand the city’s suburban network. Following a lengthy campaign, work on the NZ$3·8m restoration project began in August 2009. This included construction of three new stations at Onehunga, Te Papapa and Penrose; a fourth at Mt Smart is also envisaged at a later date.

The initial weekday service provides 25 trains from Onehunga to the Britomart terminus in the city centre and 24 outward trips. There will be 17 inward and 16 outward trains on Saturdays and two fewer in each direction on Sundays and public holidays.