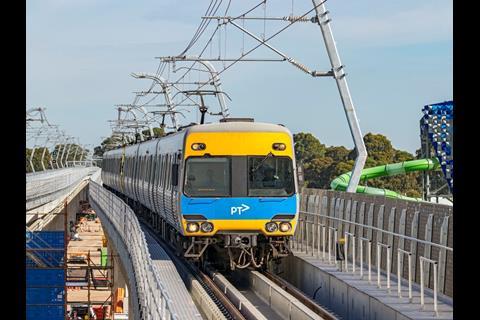 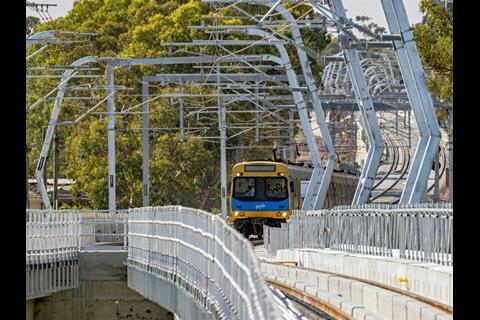 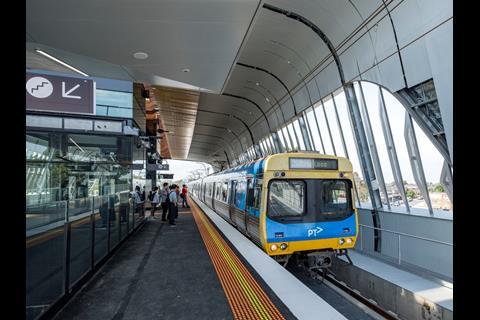 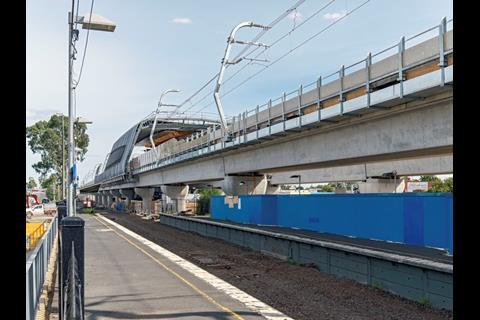 AUSTRALIA: Revenue services began operating on a new elevated alignment through the Melbourne suburb of Noble Park on February 15, when the Victoria state government’s Level Crossing Removal Authority commissioned the first section of viaduct on the Cranbourne-Pakenham line.

A 2·7 km section of the city’s busiest suburban line through the southeast suburbs is being rebuilt on an elevated alignment under an A$1·6bn contract awarded in February 2016. The work to grade-separate nine busy level crossings and rebuild five stations will facilitate the operation of a more intensive train service in conjunction with construction of the cross-city Metro Rail tunnel.

Opening of the first section, including the new station at Noble Park, has allowed the removal of the level crossings at Corrigan, Heatherton and Chandler roads, which were used by more than 40 000 vehicles per day. The line already carries more than 275 trains per day, including Metro Trains Melbourne suburban services, V/Line regional passenger trains and freight services to the Dandenong region. This led to the gates at each crossing being closed for more than 80 min during the morning peak period.

According to the authority, there had been 60 incidents at the three crossings over the six year period. Heatherton Road had the worst safety record of all the 50 level crossings identified for removal, seeing three vehicle collisions between 2011 and 2017 and 15 near-misses in 2016-17 alone.

Following completion of the elevated structure, a two-week blockade was needed to connect up the track and overhead line equipment. All services were suspended between Westall and Dandenong from January 30 and replaced by a bus shuttle.

The remaining six level crossings between Caulfield and Dandenong are due to be removed by the end of the year, with the opening of the remainder of the elevated alignment and rebuilt stations at Carnegie, Murrumbeena, Hughesdale and Clayton. Meanwhile, work will continue to complete the station facilities at Noble Park and remove the ground-level infrastructure to make way for a new public open space.