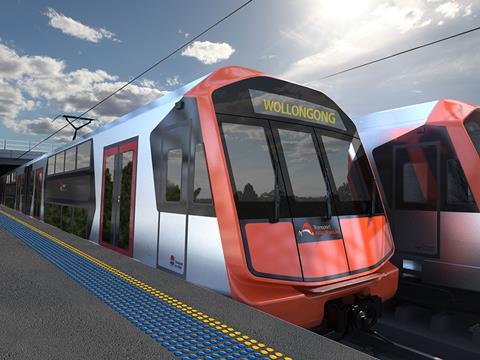 AUSTRALIA: Several rail projects have been allocated funding in the 2019-20 New South Wales budget, which was presented on June 18.

The state government is providing A$812m as part of a A$1·8bn package over four years towards the New Intercity Fleet. The RailConnect consortium of Hyundai Rotem, Mitsubishi Electric Australia and UGL Rail is supplying 554 double-deck electric multiple-unit cars and providing 15 years of maintenance under contracts worth A$2·4bn.

The budget also includes A$643m for the ‘More Trains, More Services’ programme to increase services on Sydney’s Illawarra, Airport and South Coast lines. This is to be achieved with the help of 41 eight-car Waratah 2 electric multiple-units being supplied by Downer EDI. The NSW government plans to contribute a total of A$3·2bn to ‘More Trains, More Services’ over its four-year term.

The budget contains A$38m in 2019-20 which forms part of the state government’s plan to spent A$2·8bn on the replacement of the regional train fleet. In February the NSW government signed a PPP contract with the Momentum Trains consortium of CAF, Pacific Partnership and DIF Infrastructure V for the supply of 117 multiple-unit cars and the construction of a new maintenance facility at Dubbo.

The Transport Access Program to improve accessibility at railway stations and ferry wharves is to receive A$334m as part of a A$885m funding package over four years. This will cover accessibility improvements at 68 stations, which the government says will make 90% of all public transport journeys in the state accessible for persons with reduced mobility.

The North South Metro Rail Link to serve the planned Western Sydney Airport at Badgerys Creek has been allocated A$207m for planning work. The NSW government expects to spend A$2bn on the project over its four-year term, with the federal government contributing a similar amount. Construction is expected to start in 2021 and be completed in 2026 in time for the planned opening of the airport.

A total of A$295m is to be spent on infrastructure upgrades to the fast rail network over the government’s term. An initial tranche of A$93m would be used to fund double-tracking and other improvements north of Mittagong, between Berry and Gerringong, and between Sydney and Woy Woy.

Plans to introduce eight more express services in the peaks on Sydney’s T1 Western Line are to be funded through a A$3·4m budget contribution, which forms part of an A$85m four-year package.

The budget also includes funding for urban rail projects in Sydney and Parramatta. The largest item is A$1·2bn in 2019-20 towards the construction of the City & Southwest metro extension from Chatswood to Bankstown via central Sydney, which is expected to open in 2024.

The second metro line is due to receive A$56m as part of a A$6·4bn package over four years. Construction on the line to Parramatta is expected to start in 2020, with the completion date to be confirmed once the final business case is ready.

The Parramatta light rail project is to receive A$561m as the first phase of a A$1·8bn investment over the state government’s term. Major works are due to begin this year, and the 12 km route between Westmead and Carlingford is planned to open in 2023.

The NSW government is also funding a reduction in the weekly cap on Sydney’s Opal smart card. The A$17·7m item in the budget, part of a planned A$69·6m over four years, would enable a 20% reduction of the cap from July 1 to A$50 for adults and A$25 for concessionary fares.