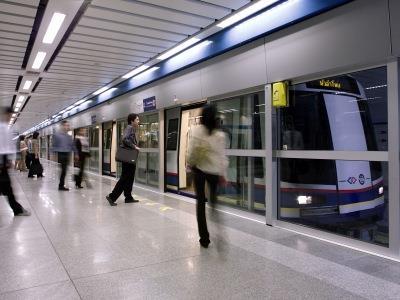 THAILAND: Work on urban rail projects in Bangkok is continuing amid the ongoing political turmoil, interim Transport Minister Chadchart Sittipunt reported following a tour of construction sites in the city on February 5.

Sittipunt provided a progress report on three metro projects. These were the extensions of the Blue Line at both ends, from Hua Lamphong to Bang Khae and Bang Sue to Tha Phra, totalling 27 km (53% completed); the 18 km extension of the BTS Skytrain Green Line from Bearing to Samut Prakan (23% completed); and the 23 km Purple Line from Bang Sue (Tao Pun) to Bang Yai, which is 85% complete. This is likely to be the first of the routes to open, with test running scheduled for September 2016 and revenue service from early 2017. Sittipunt also suggested that a preferred bidder for the 18 km northern extension of the Green Line from Mo Chit to Ku Kot could be selected by mid-April.

Other planned urban rail investment is facing potentially significant delay because of the political situation. Among the projects awaiting government approval is the 23 km Orange metro line between Cultural Centre and Min Buri, where there would be an interchange with the planned 54 km Pink Line monorail from Khae Rai, also still to be approved.