Bergen Bybanen gets the green light 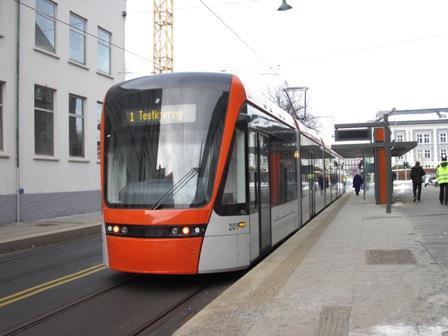 NORWAY: The first phase of the 9·8 km Bybanen light rail project between Bergen town centre and Nesttun is due to be opened by Queen Sonja on June 22.

The government has given its go-ahead for plans to extend the line to Rådal, and the project will now be reviewed by the Norwegian parliament. Funding would be provided by Hordaland County and a 10-year extension of the city centre road toll up to 2025.

Stadler Rail Group confirmed on April 28 that it had been awarded a €12m order to supply a further five Variobahn trams to operate the extended route. The original contract for 12 vehicles, placed in January 2008, included options for up to 20 more.

The bi-directional 100% low-floor vehicles are 32·1 m long and 2 650 mm wide with 84 seats and space for 128 standees. They are manufactured at Stadler’s Pankow plant in Berlin.

Read the full story in the March issue of Metro Report International.