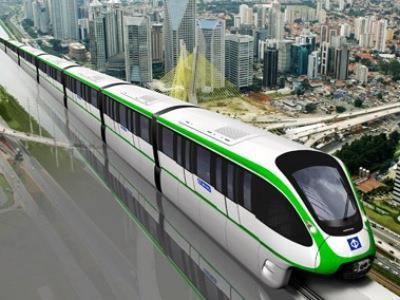 BRAZIL: Bombardier Transportation inaugurated a US$15m monorail train manufacturing plant at its Hortolândia site in São Paulo state on April 13. The US$15m facility has been developed over 18 months as the company's global centre for monorails, and will serve local and export markets.

Technology has been transferred from Bombardier's plants at Kingston and St Bruno in Canada and Pittsburgh in the USA. Bombardier said the new facility will create 250 direct and 500 indirect jobs.

Its first project is to supply 54 seven-car Innovia Monorail 300 trains for the US$1·44bn Expresso Tiradentes monorail which will link Vila Prudente and Cidade Tiradentes in São Paulo. An initial trainset will be assembled and tested in Kingston, but the rest will be produced in Brazil with the first expected to roll out later this year.

The first section of the monorail between Vila Prudente and Oratorio is expected to open at the end of 2013, followed by a second section in 2014 and completion in 2016. The 23·8 km line with 17 stops is being built by the Express Monotrilho Leste consortium of civil contractor Queiroz Galvao, construction firm Construtora OAS and Bombardier Transportation, which is to supply the trains and Cityflo 650 automatic train control.

'This new monorail manufacturing site represents the second phase of Bombardier's industrial expansion initiated in 2009 that aims to triple our number of employees in Brazil to 600 people and to quadruple the industrial area in Hortolândia', said Andre Navarri, President & Chief Operating Officer of Bombardier Transportation.

With a capacity of up to 48 000 passengers/h per direction, the monorail being supplied to Sao Paulo 'offers a transportation capacity similar to a metro, yet the light infrastructure required reduces the construction price and the implementation schedule by up to one half'.